Deaths on Everest
Just read this article, about recent series of deaths on Mt. Everest
https://ca.news.yahoo.com/robin-fish...150813564.html 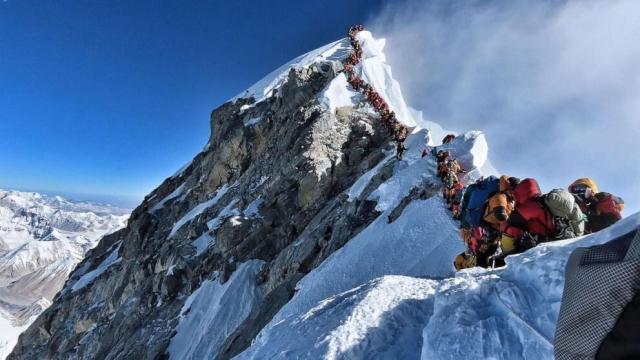 It is mind - boggling.

Looks like fun, spend ~$50k to summit, most of the trip spent trudging in a long line of people, or sitting, waiting for the line to move (while your body is slowly dying) all for a brief moment at the top. Sure you get to check off something from your bucket list, but hardly seems like a meaningful opportunity to connect with nature
KARVITK and Mr Conservation like this.
kellymcdonald78 is offline
Quote
post #5 of (permalink) Old 05-29-2019, 06:51 PM
5thhorseman
Headed for the Mountains

I once thought that if I win the lottery maybe I could splurge for the fee to be guided up Everest. But this just looks ridiculous. I think I would feel sickened by all the crowds up there. If I ever trekked in Nepal I would skip the Everest Base Camp visit.
5thhorseman is offline
Quote
post #6 of (permalink) Old 05-29-2019, 07:10 PM Thread Starter
zeljkok
Summit Master

Quote:
Originally Posted by 5thhorseman View Post
I once thought that if I win the lottery maybe I could splurge for the fee to be guided up Everest. But this just looks ridiculous. I think I would feel sickened by all the crowds up there. If I ever trekked in Nepal I would skip the Everest Base Camp visit.
I trekked to EBC in 2007. It really depends what time of year you go. Spring is Everest climbing season & base camp is a mess. But my trip was in late October & EBC was completely deserted, thus giving some of that 'sense of wonder'.

I admit looking with longing up Khumbu Icefall & thinking "what if". Save $$, get skills, train/optimize high-altitude etc. I was still young enough. But now even if I could physically & someone would give me 50K+, I'd say like you 'no thank you'.

Nepal has commercialized immensely. Once iconic Annapurna Circuit has become like Joffre Lakes there in BC. Half of it is now driveable & people trail run it, MTB large parts, etc. I'd like to go to K2 base camp instead, this is still relatively off radar & Pakistan is not as unsafe as it was couple of yrs ago.
Autumn Sky
zeljkok is online now
Quote
post #7 of (permalink) Old 05-30-2019, 11:40 AM
lobo
High on the Mountain Top

This would suck too.
Kilimanjaro cable car would take tourists to 19,341-foot summit

DAR ES SALAAM, May 7 (Reuters)  Tanzania wants to boost tourist numbers by putting a cable car on Mount Kilimanjaro, Africas tallest mountain, and is in talks about the project with two companies.

Around 50,000 tourists annually climb the 19,341-foot Kilimanjaro. A cable car could increase tourist numbers by 50 percent by providing access to the mountain for those unable to climb it, said Constantine Kanyasu, the deputy minister for tourism.

The country is conducting feasibility studies on possible routes at the moment, Kanyasu told Reuters.

We are still doing a feasibility study to see if this project works, he said. There are two companies, one from China and another from a Western country, that have shown interest.

This wont be the first time in the world. Cable cars are there in Sweden, Italy, the Himalayas, he said.

The length of the route has not been finalized, with various options under consideration depending on cost and engineering issues, Kanyasu said. An environmental impact assessment would also be carried out, he said.

Porter and guide groups who take tourists up the mountain oppose the project because they fear cable cars will reduce the number of climbers.

One visitor from the U.S. can have a maximum of 15 people behind him, of which 13 are porters, a cook and a guide. All these jobs will be affected by a cable car, he said.

We are of the view that the mountain should be left as it is.

There are about 20,000 porters working on Mount Kilimanjaro and Meru, another mountain nearby, he said.

Tanzanias earnings from tourism jumped 7.13 percent last year, helped by an increase in arrivals from foreign visitors. Tourism revenues raised $2.43 billion for the year, up from $2.19 billion in 2017.

Tourism is the main source of hard currency in Tanzania, known for its beaches, wildlife safaris and Mount Kilimanjaro, which has three volcanic cones and is about 16,000 feet high from its base.

Dagu Glacier Gondola in China reaches an elevation of 15,900 feet.
A cable car goes almost to the top of 15,633-foot Pico Espejo in Venezuela.
The summit of Colorados Pikes Peak, 14,115 feet, can be reached by cog railway or by a road.
The gondola at Indias Gulmarg ski area reaches an elevation of more than 13,000 feet on Kongdoori Mountain.
Klein Matterhorn in Switzerland, 12,739 feet, has a cable car.
Californias Palm Springs Aerial Tramway goes to the top of 10,933-foot Mount San Jacinto.
lobo is offline
Quote
post #8 of (permalink) Old 05-30-2019, 03:14 PM Thread Starter
zeljkok
Summit Master

Watched last night short piece on Global about this. They aired it in relation to BC climber from Victoria (forgot the name), who barely survived & is now safe back to Canada. Issue is that weather opened briefly on April 23 & everybody rushed up, which created this jam.

Nepal government does not assess skill or limit number of permits. In their eyes if you have $11000 to pay, you are good to climb Everest. In addition there are companies that will happily take your $$ without assessing your skill. Few months ago watched on YouTube movie about some Nepali Canadian woman from Toronto. She figured she wanted to climb Everest. She "trained" on walking trails in Ontario & she was "good to go". Local company from Kathmandu took her $$ and let her in. She never climbed anything, never held an ice-axe or had crampons on her boots. At basecamp sherpas told her she should turn back because she was slow and just not fit for it, but she wouldn't listen. She made it to the top just on sheer willpower and adrenaline. But she did not make it down. She died freezing to her death on descent. She was an amazing woman, but she should have never been there in the first place.

Bodies that administer such things, in this case Nepali government, are the only that can address the issue because human hordes will keep pouring in more and more. Limit # of permits and have strict skill assessment criteria. Increase fee if you must, but manage access. This is not new concept. There would be deaths every year on Half Dome in Yosemite from people tripping on each other up the cables if access was not limited. Lake O'Hara would be garbageland if 11km access road was open to public traffic. List goes on.

It's not just Nepali Government fault. The sheople are responsible too.
sandy is offline
Quote