Golden Ears - June 10, 2021
With a week's worth of cloudy rainy weather coming up, I was considering whether to install new soffit vents in preparation for the house getting painted, or getting out there on a hike. I've been thinking of taking my kids up Golden Ears at some point but had no idea of the conditions other than a hiker I met two weeks ago while at the Alder Flats viewpoint on a family hike. The conversation went something like this:

I didn't know what to make of that but in hindsight I guess the shelter was quite buried in snow. Hard to miss it though, I would think.

Anyways, the soffits could wait. I could do those in the rain anyways, right?

I grabbed my dusty mountain bike from the garage rafters, pumped up the tires, and loaded it into the truck. There was a chance of rain in the forecast and a few splatters on my windshield going west on Hwy 1 made me wonder if this was a good idea. On the way across the GE bridge I heard Jeff O'Neill on CFOX saying it was a monsoon in downtown Vancouver. I didn't really feel committed yet but I hate the feeling of turning back. 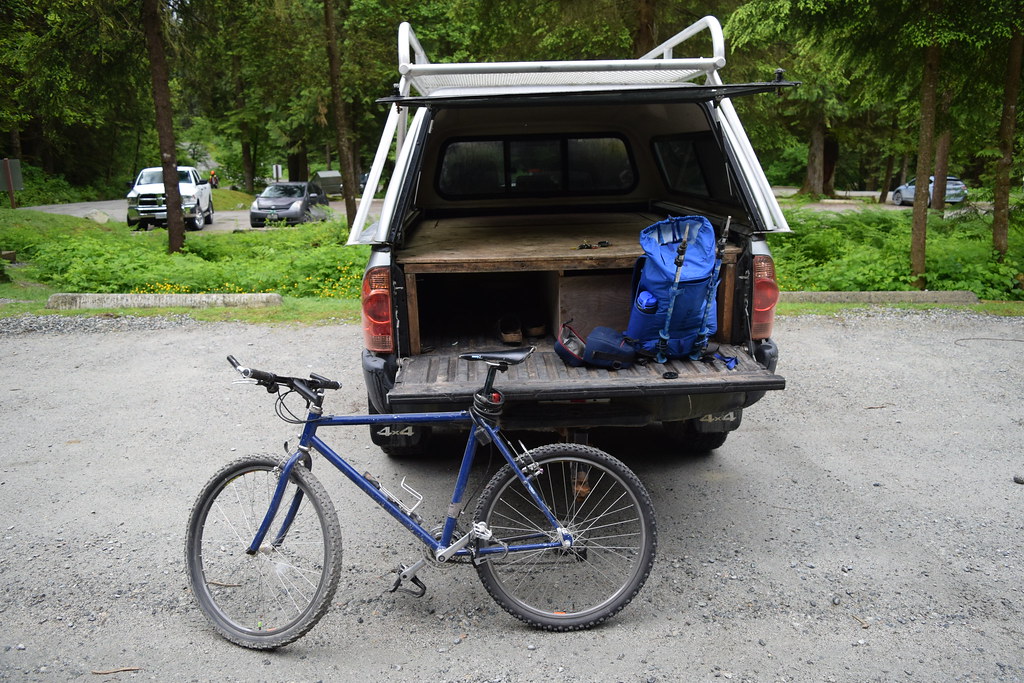 Well, I should have checked the bike over a bit more before I left. Shortly after departing on the East Canyon trail I found that my rear shifter didn't work at all! Oh well, it would be 5th gear all the way. The drip, drip, drip of weather didn't help. It was just enough dripping to be annoying, and not enough to have to wait it out.

On the plus side I hadn't seen anyone since near the parking lot and the isolation was appealing. I was thinking about Alex Honnold in Free Solo when he was trying to explain it to his girlfriend, how it was all about performance. You just need to push yourself to your limit once in a while.

Heading across the connector bridge. Looks a bit gloomy up there. 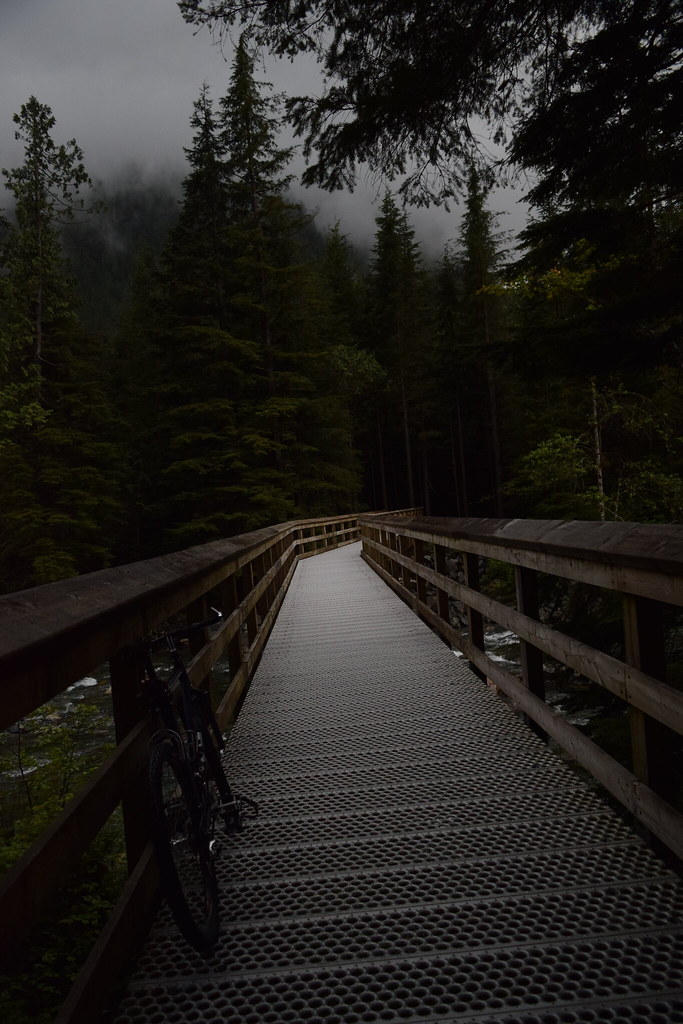 Snow starts as soon as you crest the ridge that connects with Panorama. Obviously there was a ton of snow up here still, much more than in April 2015 when I was here last. Snow was quite soft.

I got to the emergency shelter still surrounded by snow but accessible. I had charged my phone battery the night before but hadn't turned it on yet. When I did the time was 7:25PM! Say what? No cell service here so it couldn't sync and I had no idea of how quickly I was moving. I had left the parking lot at 9 so if I made the summit by 2 I'd be happy. I guess at this point I was feeling committed to going all the way. 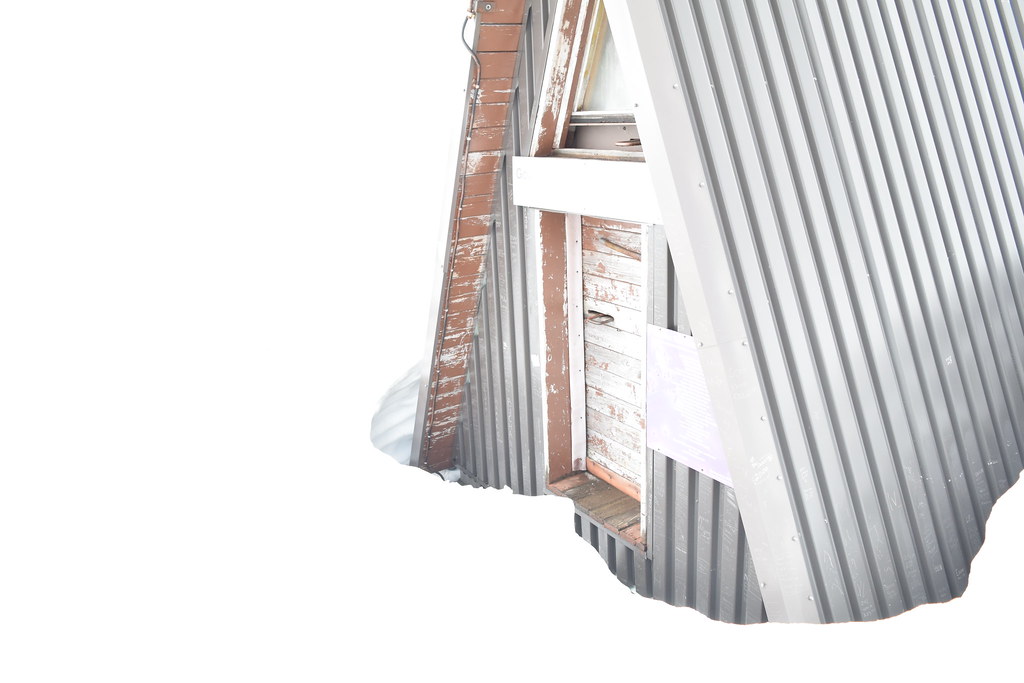 Heading up from the shelter I was in clouds most of the time, and a gale was blowing over the ridge from the west. I was following tracks from a couple of other hikers with no spikes or poles. I was planning to go to the left of the leftmost knoll, which I think is the summer route, but the tracks went up the steep gully between the knolls. I figured I was comfortable enough to do the same. I had spikes on and some hiking poles which would probably bend in half if used in a self-arrest, but some good step kicking made it work.

As soon as I was on the summit ridge the notifications started pouring in. I checked the time: 2:20. Shoot. Not as fast as I thought. 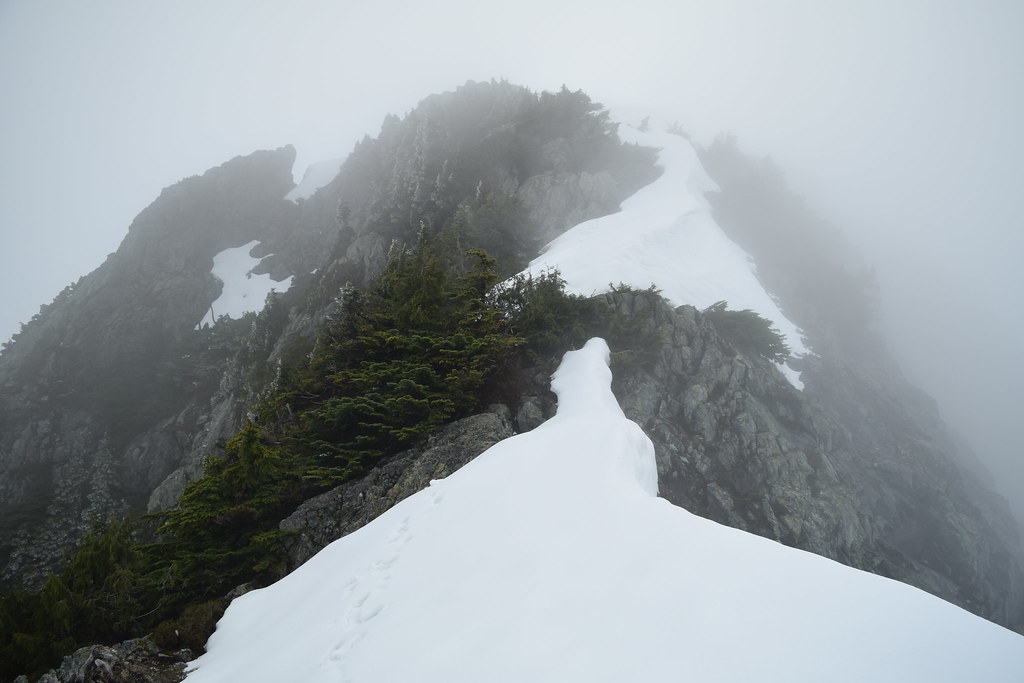 Another 10 minutes and I was on the summit and back. 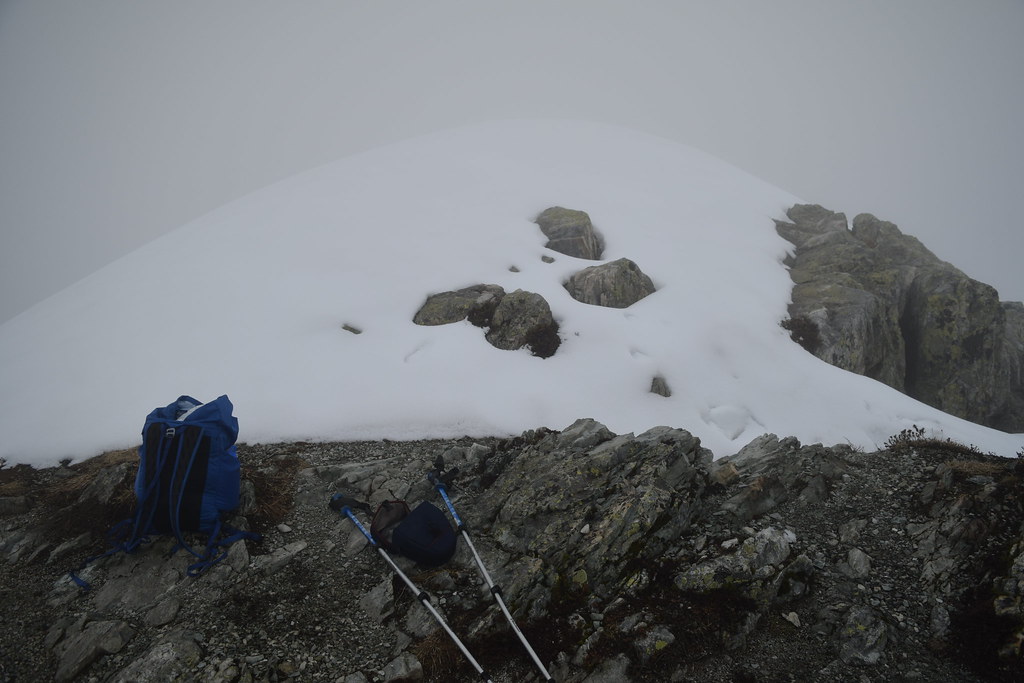 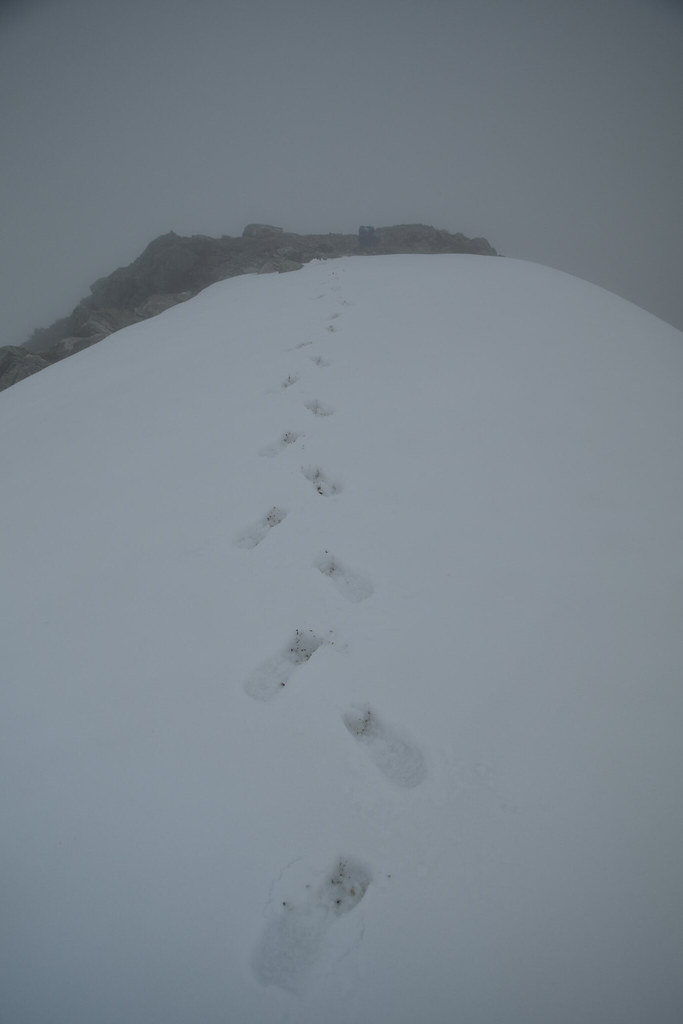 Coming back down was a bit more hairy than going up. Regretted not bringing an ice ax so I hugged the trees down the summit ridge. The steep gully freaked me out so I headed toward the summer route and the security of veggie belays. Further down I looked back to survey the routes I'd taken (green = up, red = down): 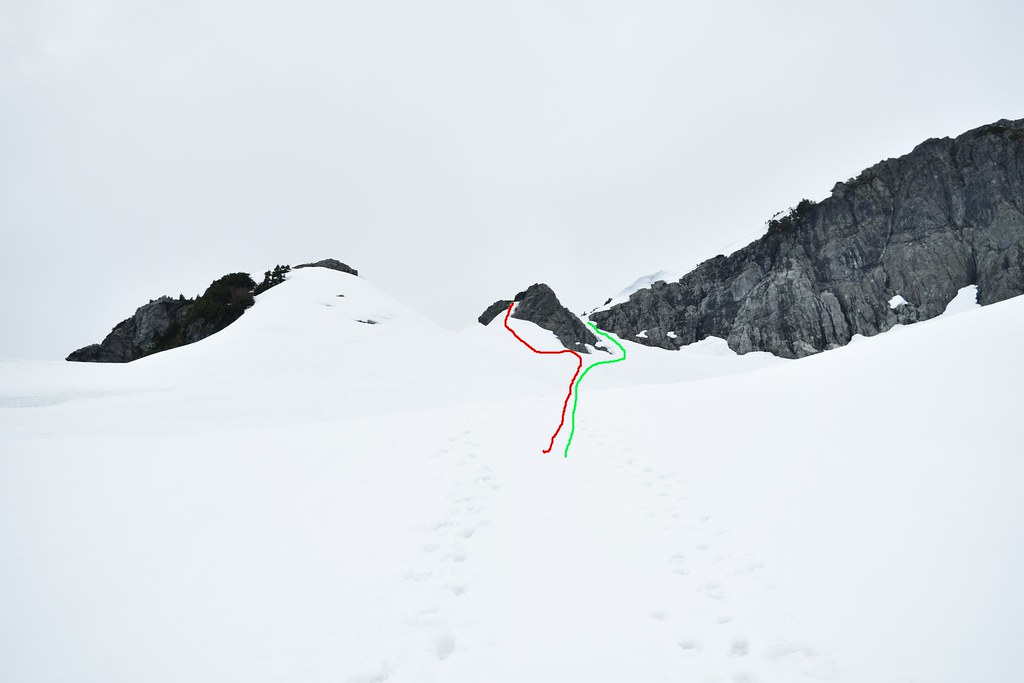 Funnily the weather cleared up after I started the descent so I snapped a few pics on the way down. 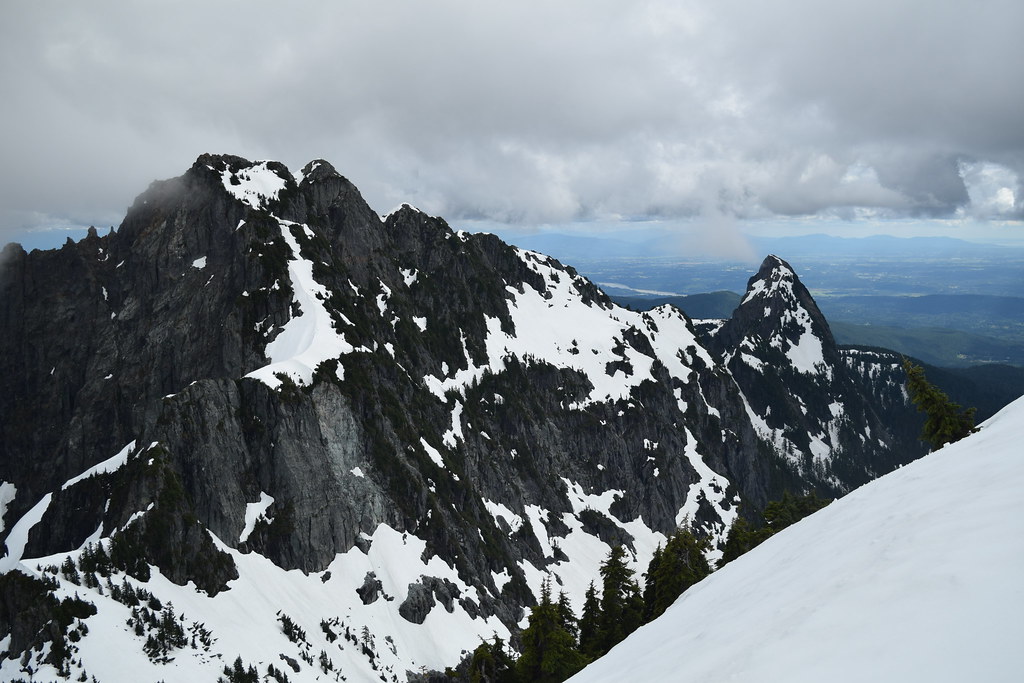 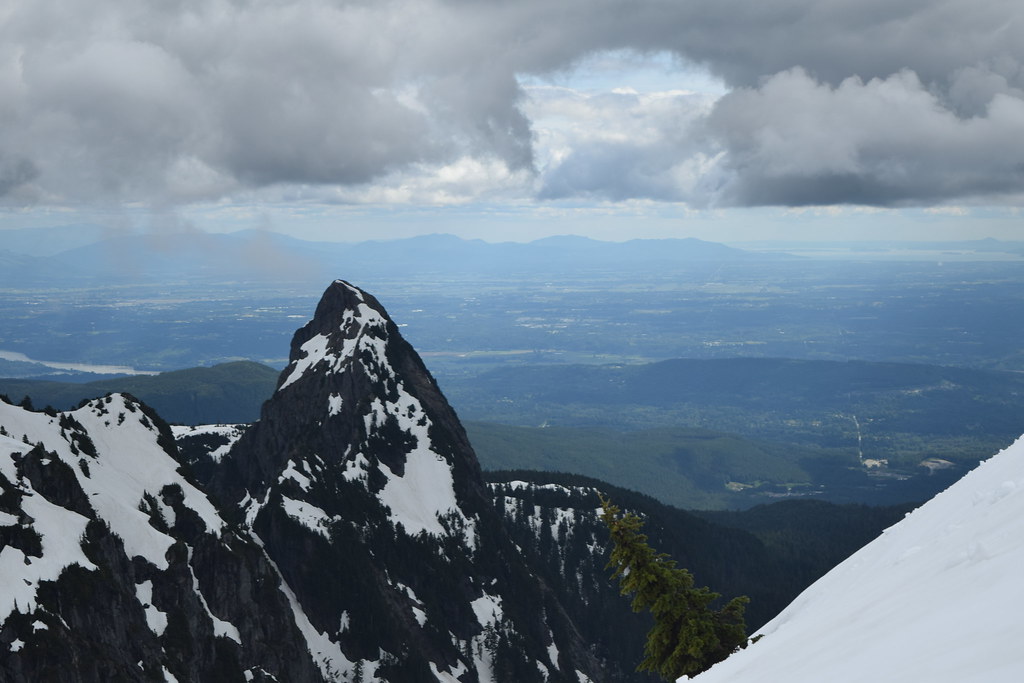 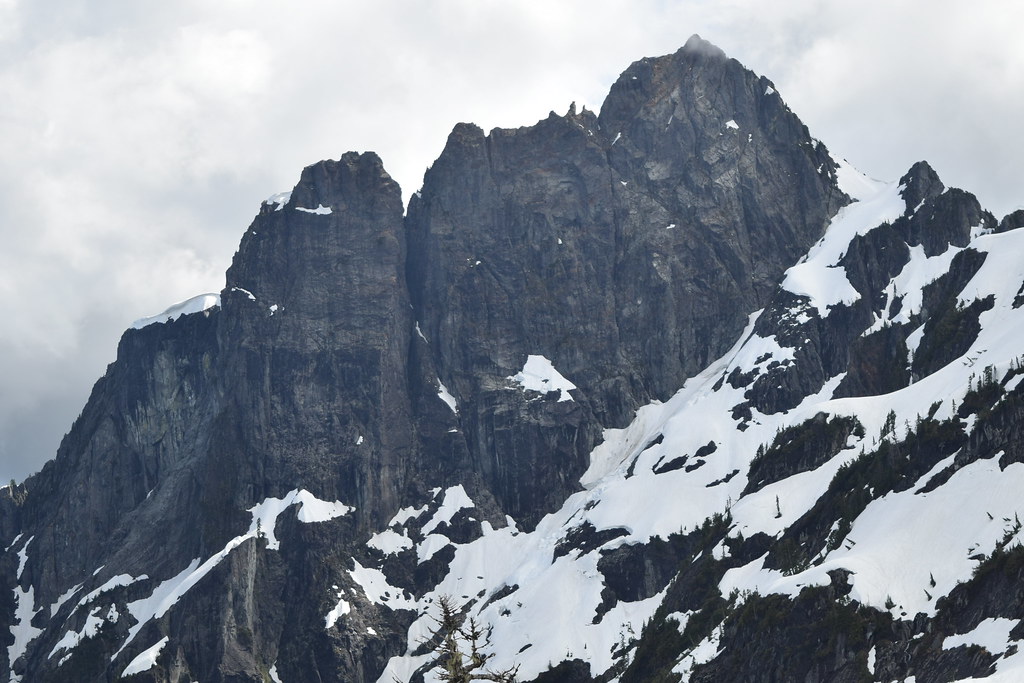 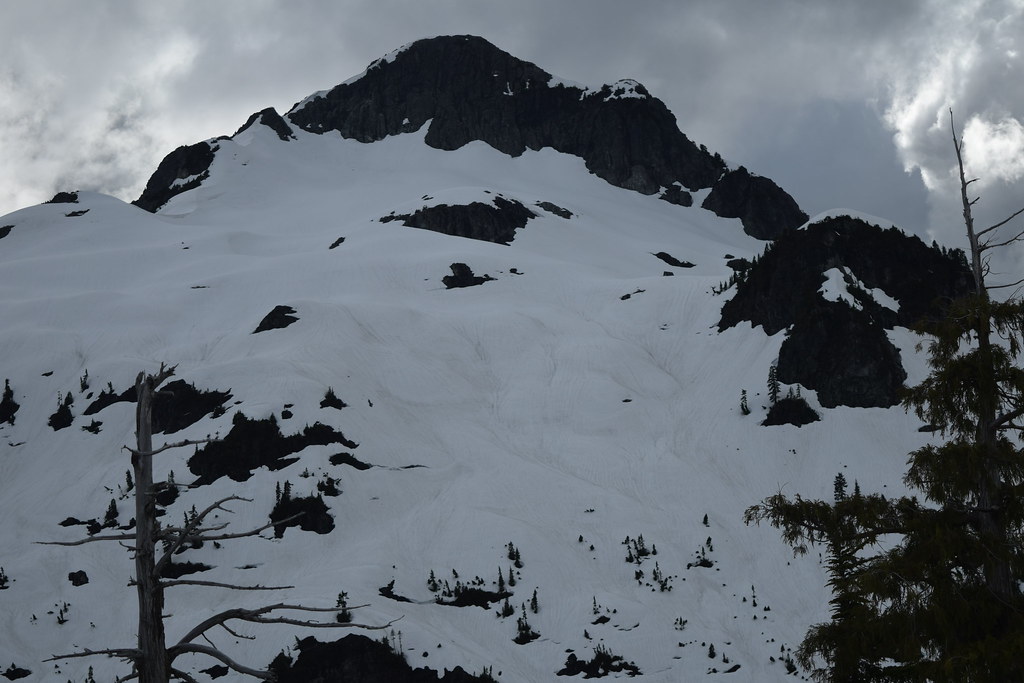 (Pics are via Flickr. Much easier than the CT photo upload, which always complained about a missing security token when I tried to upload the maximum of 10.

Cool. Great job pushing forward in that kind of weather.
Any lingering effects from your accident on Rexford a few years ago, physical or otherwise?
John and Katie is offline
Quote
post #3 of (permalink) Old 06-12-2021, 10:46 AM Thread Starter
5thhorseman
Headed for the Mountains

Hey John, hope you and Katie are doing well. Physically all my injuries have healed up nice. I was lucky to have a very skilled surgeon fix up my ankle. It's now slightly larger than the other one but I only notice that when I put on skates. It's also slightly more stiff but the difference is so small that I don't really notice. It doesn't really affect my hiking.

Emotionally I'm not sure yet. I'm definitely more wary when there's some exposure and am more careful about my movements and holds, but that's a good thing. But I'm also hiking a lot more with my kids these days (8 and 10) so the hikes are a bit more sedate. I do plan to go back to Rexford and similar hikes at some point. As my kids grow up and want to do those types of hikes as well is when those fears will come to the fore, I think.
John and Katie and treord8 like this.
5thhorseman is online now
Quote
post #4 of (permalink) Old 06-13-2021, 12:41 AM
zeljkok
Summit Master

Looks good! Very nice to finally see TR from you. I thought June would be a bit early for Ears in terms of snow cover. Looks like area has changed, in my time you could not cycle approach.


Edge sounds interesting. Which way do you have in mind? Traverse from Blanshard, or White Dyke?
Autumn Sky
zeljkok is online now
Quote
post #5 of (permalink) Old 06-13-2021, 05:27 PM Thread Starter
5thhorseman
Headed for the Mountains

Quote:
Originally Posted by zeljkok View Post
Edge sounds interesting. Which way do you have in mind? Traverse from Blanshard, or White Dyke?
Hey zeljkok, I think White Dyke is probably a good idea but I reckon I need to wait for most of the snow to disappear and a good hot spell to dry it out. August maybe.

I wouldn't mind doing the traverse one day but I'd rather familiarise myself with routes on Edge and Blanshard first. I'll have to study up on altrails route between Edge and GE.
5thhorseman is online now
Quote
post #6 of (permalink) Old 06-14-2021, 06:59 PM
Spectrum
High on the Mountain Top

nice to see your TR.
also nice to see that you have same bike suspension as me.
I'll be curious about your emotions when you go back to Rexford.
oldmatt is offline
Quote
post #8 of (permalink) Old 06-17-2021, 02:04 PM
BubblinBacon
Hittin' the Trails

Did you hear about the hiker/mountaineer who was socked in by fog for 2 WHOLE DAYS. Guy sat in the emergency shelter. and couldn't move Guess he needed a few days away from the misses XD
BubblinBacon is offline
Quote