Summiting Golden Ears - A Scenic Snowy Scramble - 11 Nov
Perhaps it was the unseasonably sunny weekend forecast, or perhaps it was the excitement to see and feel snow as winter approached. For some reason, we were craving a snowy summit this weekend. We set our eyes on a two-day trip to Golden Ears Peak, a mere 1.2-hour drive away. It was going to be costly with only Emil and I sharing a rental car, but we decided eventually that a sunny weekend sitting around at home would feel worse than a bleeding bank account. 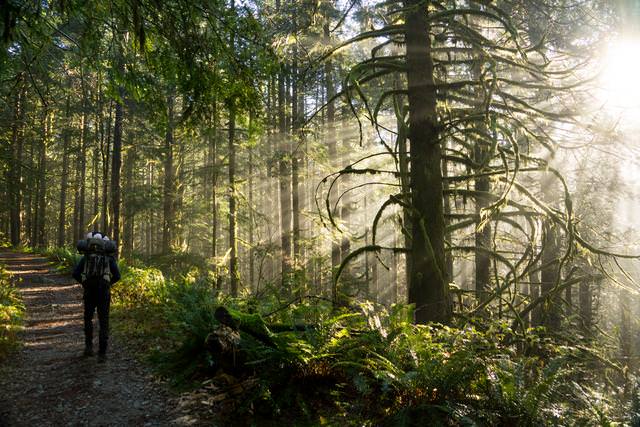 And so we began hiking through the damp forest, the mist catching shards of morning sun that filtered through the canopy. We began in a cool 4 degrees at 350m elevation. At 800m, we saw the first traces of snow slowly melting in the shadows. It wasn't until 1100m that snow blanketed everything. From this point, we were faced with icy rocks and an increasingly challenging climb. Inexperience and an overzealous dream of vast snowfields had led us to bring snowshoes on this trip, which ended up being no more useful than training weights. Crampons would've been a smarter choice. 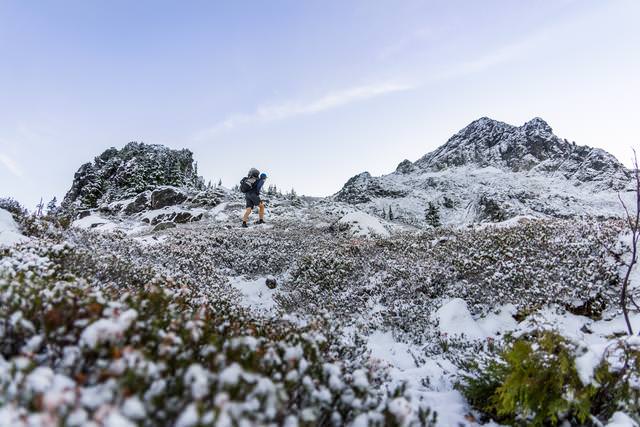 At some point in time, the crackling of rockfall on a neighboring mountain echoed through the range. We paused in our tracks, listening to the guttural gargle of rocks tumbling down hundreds of meters, dislodging others in the process. Once the rocks came to rest, an immense silence pierced the air  it was only then that it occurred to us how extremely quiet the whole area was. 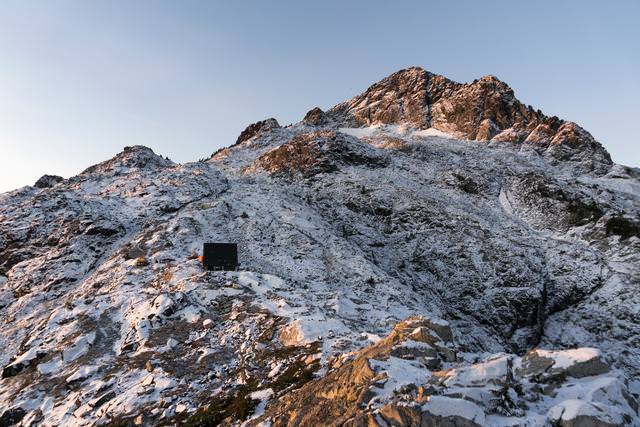 We eventually made it to the campsite at 1360m, placing our feet carefully and resourcefully finding handholds to get past icy sections. The campsite was situated 350m below the summit, on a wide ridge, with an emergency hut where we hid from the wind and cold that numbed our extremities. It offered views of the mountain range to the east, while the peak obstructed views of Coquitlam city to the west. 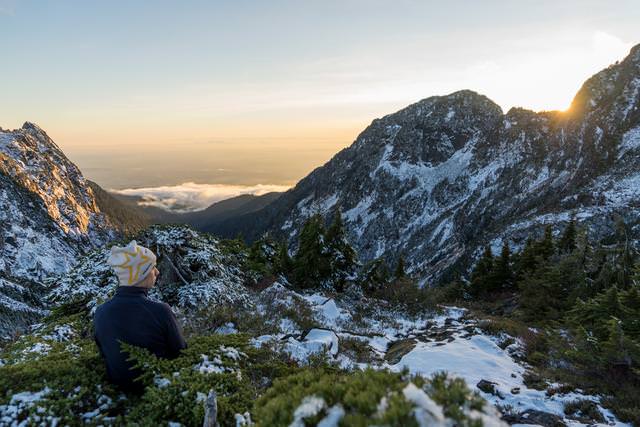 Dumping inessentials at the campsite, we continued up towards then peak, planning to send it for sunset and return in the dark. Route markers were sparse and icy patches abound. We soon concluded that descending in the dark would be excessively sketchy and so decided stop at a spot that offered a slight view through a gap between Golden Ears Peak and Edge Peak. We headed back down to camp as the sun dipped behind the mountains, indirect sunlight casting a purple hue on the range to the east. 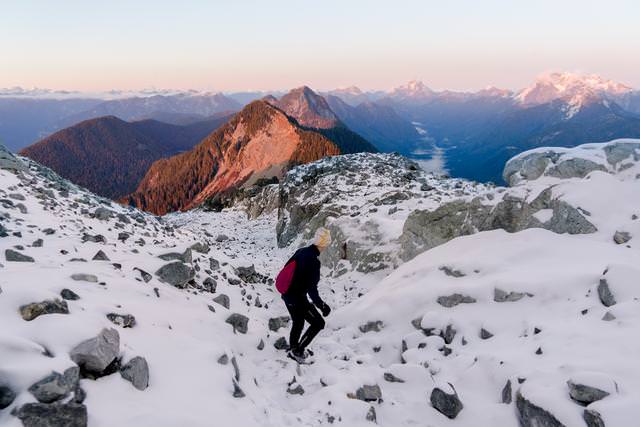 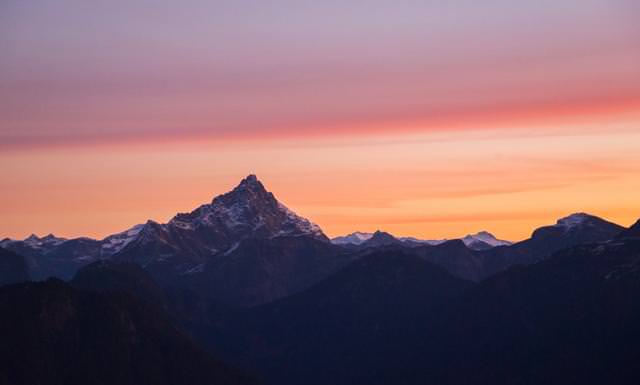 Can anyone kindly ID this mountain? It is to the east of Golden Ears 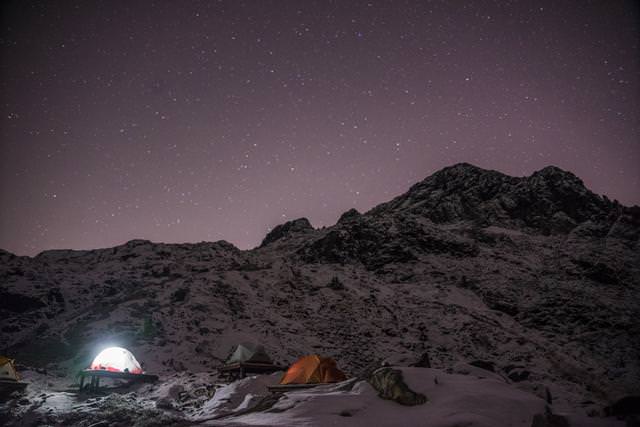 Night fell and so did the temperature. A constant moderate wind blew from the east, numbing our ill-equipped toes. The sky was clear and stars speckled the sky, but the brightest part of the Milky Way unfortunately hid herself on the other side of Earth. 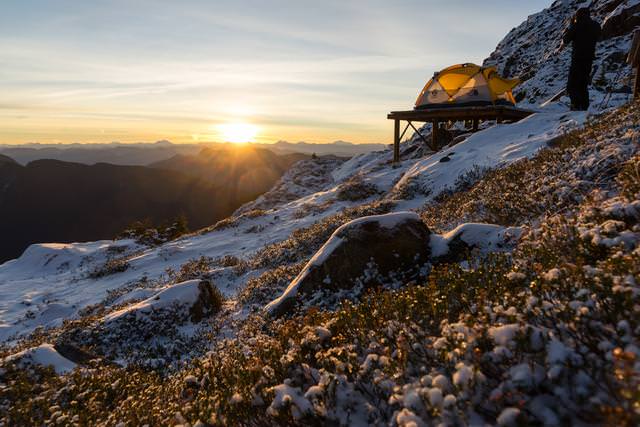 7am. Orange light bathed the campsite, accentuating textures in the snow. Feathery crystals of surface hoar glistened, silently contributing to the ambiance. I made the journey to the summit alone as Emils knee was bugged by an injury from a month ago. After a forty-five minute high-ish effort of scrambling over snowy rocks, I crested the summit and finally got a view of the west side that eluded us until now. Fog was rolling in over Pitt Lake, channeled through the mountains. Layers of mountains in the distant ranges stretched on into infinity. Frosty icicles hung from trees at a 45 degree angle, crafted by unobstructed winds. It was nice. 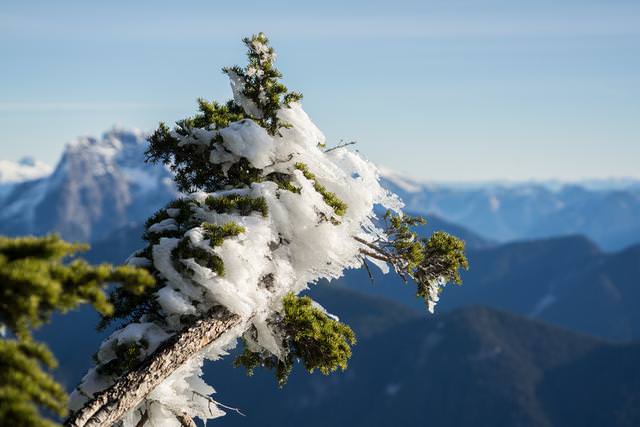 I returned to camp via a slightly different path. A set of footprints led the way to a permanent snow field free of rocks and obstacles. The fastest way down was clear. I sat on my water proof pants and slid down the slope, controlling speed with my feet as kicked-up frost and cold air brushed my cheeks. It was a short-lived but but greatly satisfying moment. 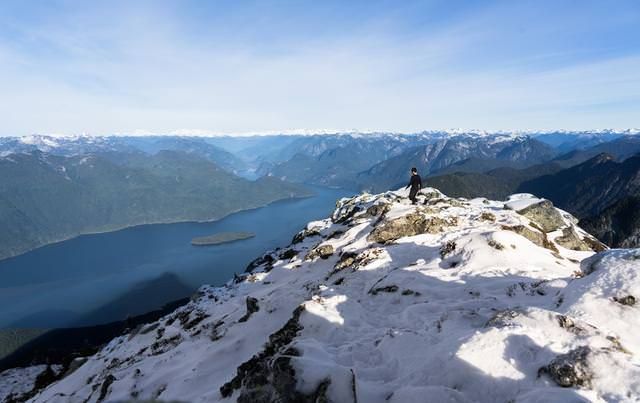 Can anyone kindly ID this mountain? It is to the east of Golden Ears
/
Judge Howay
Autumn Sky
zeljkok is online now
Quote