Why do we write trip-reports? In my blog I do it to remember my own experiences of the trip and to keep some technical details of the routes, quality of approach roads, trail conditions, must-have equipment and so forth. When I read somebody elses trip reports I look mostly for updates on trail conditions and any tips there might be. Impression this trail left on me is most likely of no interest to anyone here, trail details are also very well known. Lets focus then on current trail conditions. We did the trail a week ago on BC Day long weekend, but I dont think the conditions changed much.
Trail from Cypress Bowl to Strachan Meadow is in great shape. It is so nice one can easily walk with a stroller there, not that I recommend it (I took a jogging stroller up to Elfin lakes once, dumb idea). Improved section doesnt go far past the Meadows. It turns into regular trail with roots and rocks half way up the knoll. On the ridge leading to the summit of St.Mark we walked into a cloud of bugs. That cloud of insects seemed to cover the entire trail. There are tons of those pesky little flies and mosquitoes everywhere. Bug-spray didnt deter them, and I deeply regretted not having a bug-net.
Cypress to St.Mark stretch was completely snow free. The first snow we encountered was on the south summit of Mt.Unnecessary. Snow patches were relatively small, did not require crampons to cross, can serve as a water source if someone choses to camp on Mt.Unnecessary. Ridge leading to West Lion was mostly dry with one small pile of snow off the trail near the top of it. But there was a sizeable snow patch right on a trail, where it traverses under the West Lion. The snow was soft and easy to cross. We didnt use crampons or ice-axes, though kids used trail-spikes, for better traction (and added confidence). In colder weather, when that snow is hard and slippery crossing without crampons may be tricky.
Past the Lions there is a bit more snow, but again, no equipment required (when the weather is hot and snow is soft), snow patches can either be easily crossed or bypassed. The trail becomes more rough, but still is easy to follow. Climbing up and down those darn knolls of the ridge is really tiring, especially in hot weather. Thankfully, due to the amount of snow left there is no shortage of water.
On a map HSCT circles around Davids Peak, coming close the the Hanging lake, but in reality main trail goes over the peak and the side trail is very easy to miss, Im not sure it exists anymore. I think I noticed the fork, where lower trail split from the main one, but I didnt find its other end where it was supposed to re-join trail from the summit of Davids peak. I wonder if HSCT was re-routed over Davids Peak and lower trail purposefully abandoned.
After Davids peak trail condition greatly improves as it gently rises to Harvey Pass. Its not a scramble through bushes anymore, but a nice even path through a meadow.
Magnesia Meadows are still have quite a bit of snow, but there is no lack of dry camping spots. The bugs on the Meadows are ferocious, the worst spot on the whole trail in terms of the amount of insects per cubic meter of air.
Past the meadows the trail is in good condition. There was one spot where we temporarily lost the trail due to a large snow patch covering everything, but it didnt take long to find the path again.
North-Westerly side of Mt.Brunswick had a couple of small icy snow piles right on a trail, but those could be easily bypassed.
Water in Brunswick lake is knee high where the trail crosses the tip of the lake. But its not too cold, so on a hot day that lake crossing is rather a pleasant procedure. :-)
All of the creek crossings between Brunswick and Deeks lakes did not pose a problem.
While circling Deeks lake on the left we discovered an unexpected hindrance - pretty large snow patch, obstructing the way. Snow was hard, icy and slippery. It was the only spot where crampons and ice-axe would be justified, but the icy stretch is so short, that putting crampons on and taking them off will take more time, than bypassing the ice by going down to water edge and then back up to the trail.
Lakes outlet is easily crossed on a large log jam. Keep in mind, there is a wasps nest near that crossing and wasps dont like visitors.
Last 6km after the lake is a slog on dusty steep trail and boring old logging road. The road seems to stretch forever, though its only about 3 km long. There was a car parked near the end of this road. I immediately felt annoyed, why didnt we drive to this spot? It would have saved us ~3km of walking. But then, passing severely washed out section of the road, I thought, that perhaps, walking was not so bad, definitely better, than getting a car out of a huge pot-hole on an abandoned forest road. In general, the road is in decent condition except for two washouts. Its possible to drive it if one has an off-road vehicle and equivalent driving skills.
Any kind of trip-report looks better with pictures, so here some hazy pictures from our trip. Yep, we did it when the smog was the worst. Not that it was done on purpose, it was simply too late to change our plans for the weekend.

Summit of Mt.St.Mark doesnt have panoramic views, but the view west is pretty nice, well, when it is not obscured by the smog. There we are supposed to see Howe Sound and islands. 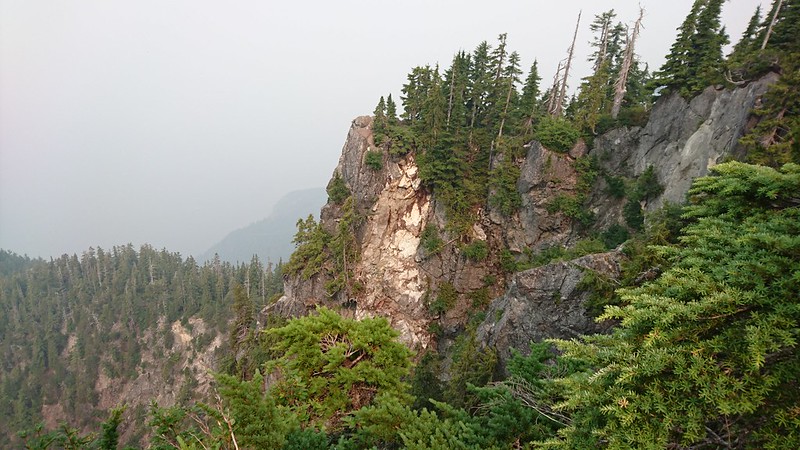 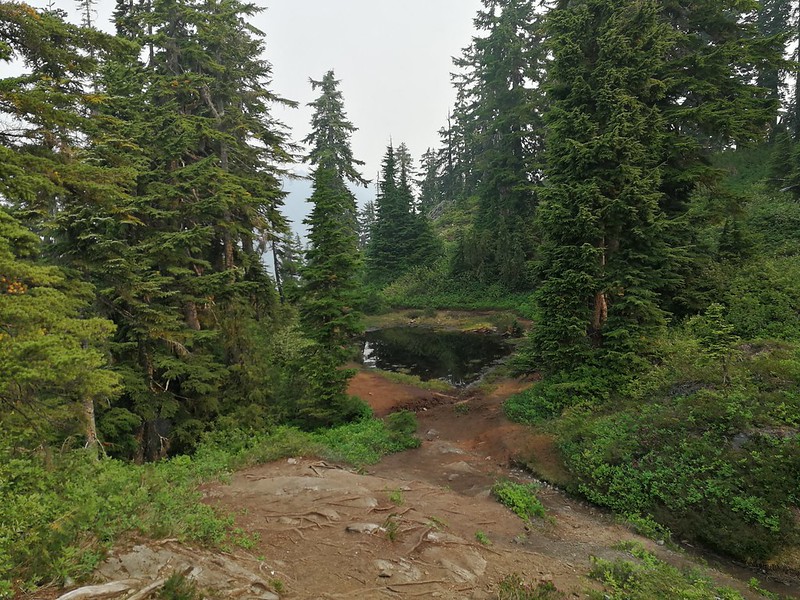 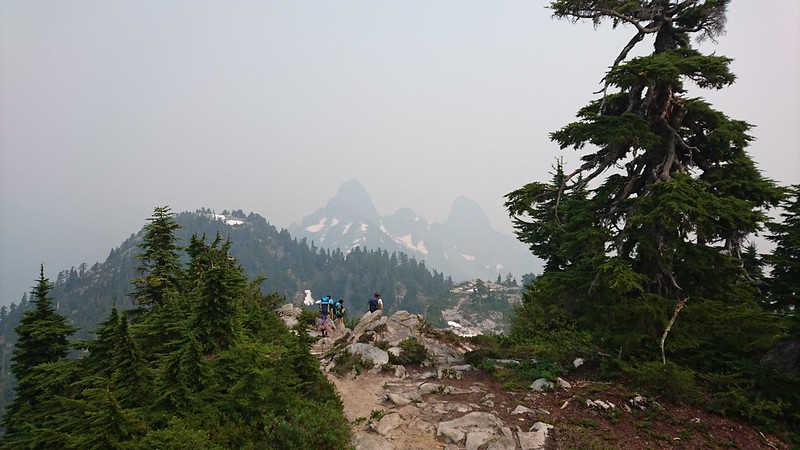 One of the highlights of the trail - scramble down a steep rocky slope, holding onto a rope. By the ed of the trip kids did not require assistance anymore and could negotiate any steep descend on their own. 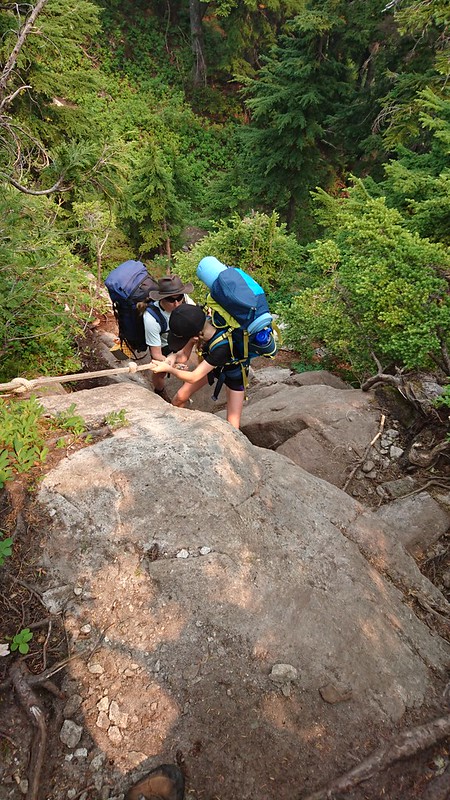 The Lions from the col between summits of Mt.Unnecessary. 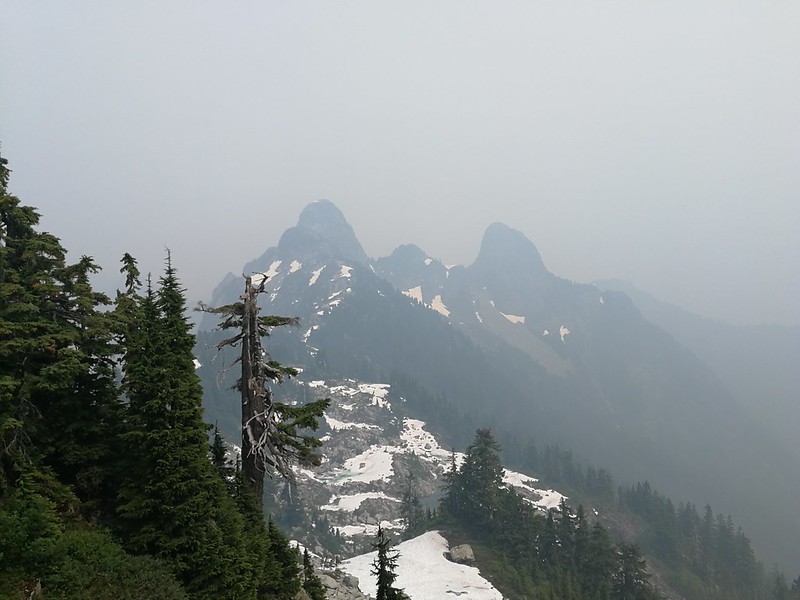 West Lion close up, from the shoulder. 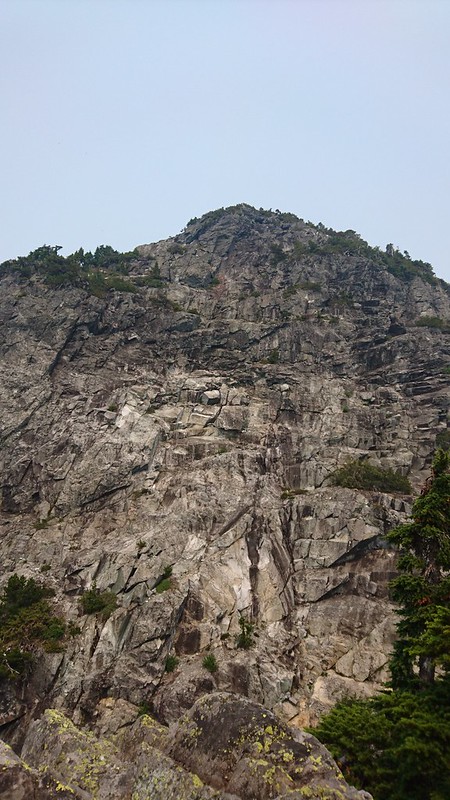 The trail goes steeply down on east side of the ridge, then traverses under the cliff of West Lion, and then ascents to the saddle between the West Lion and the small middle knoll.
Crossing the snow patch beneath West Lion. 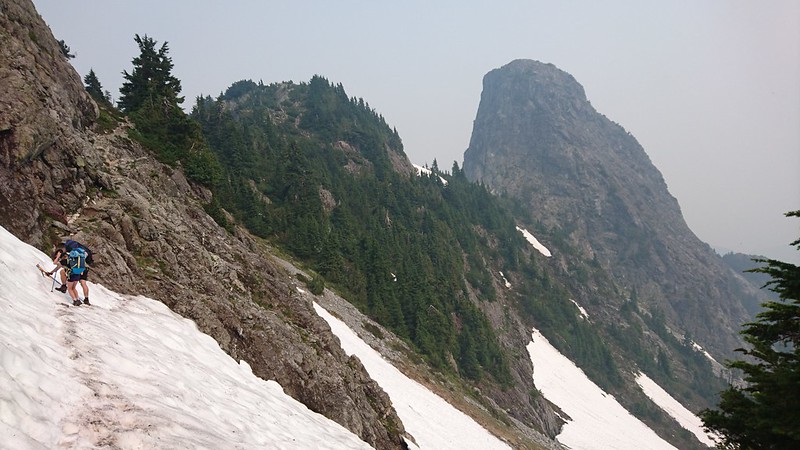 Side ridge past the Lions. 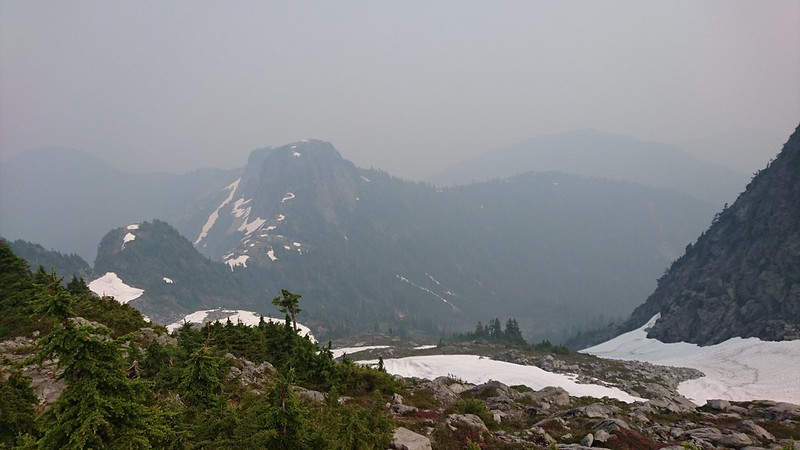 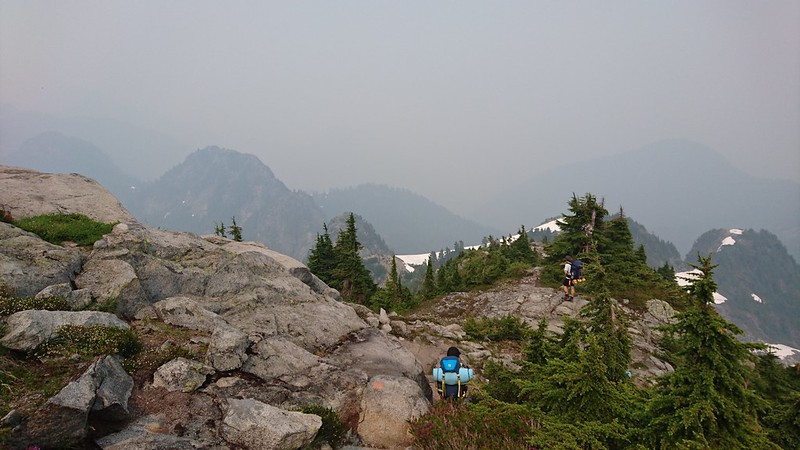 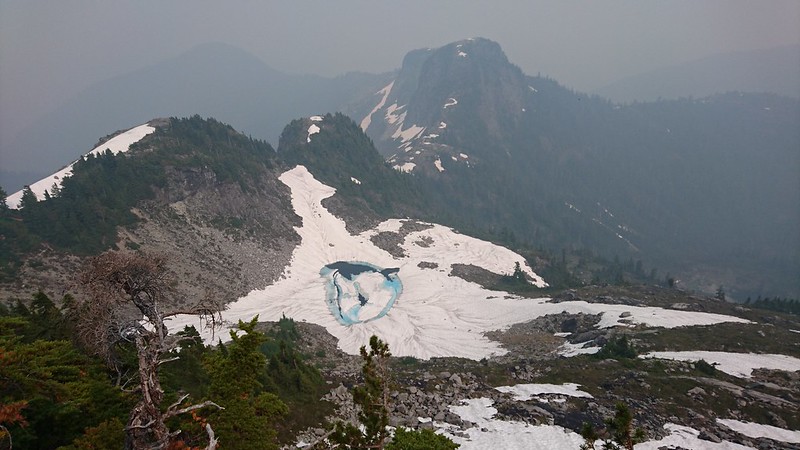 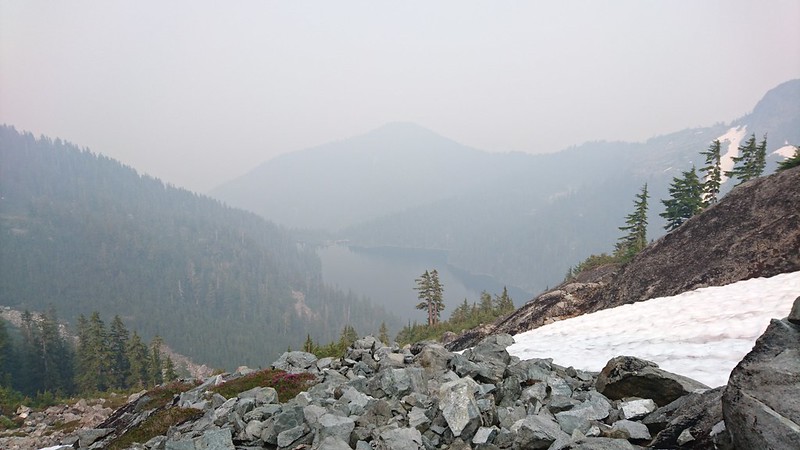 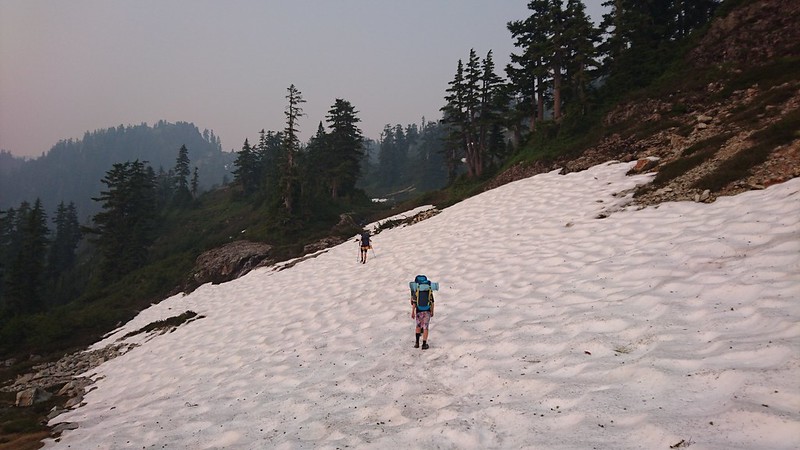 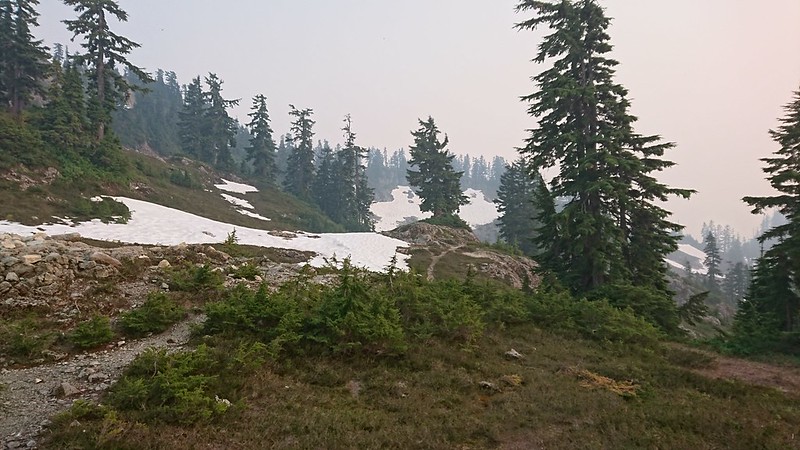 We spent the night at the Meadows. In the morning smog was partially blown away and we got some views. Mt.Brunswick in the morning. 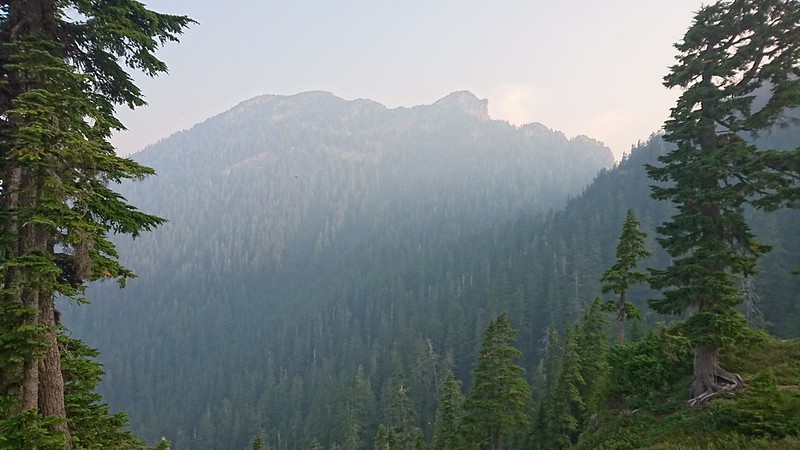 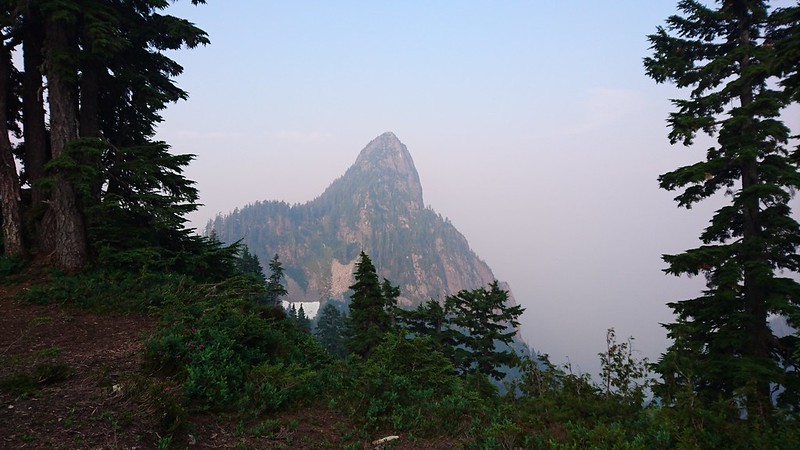 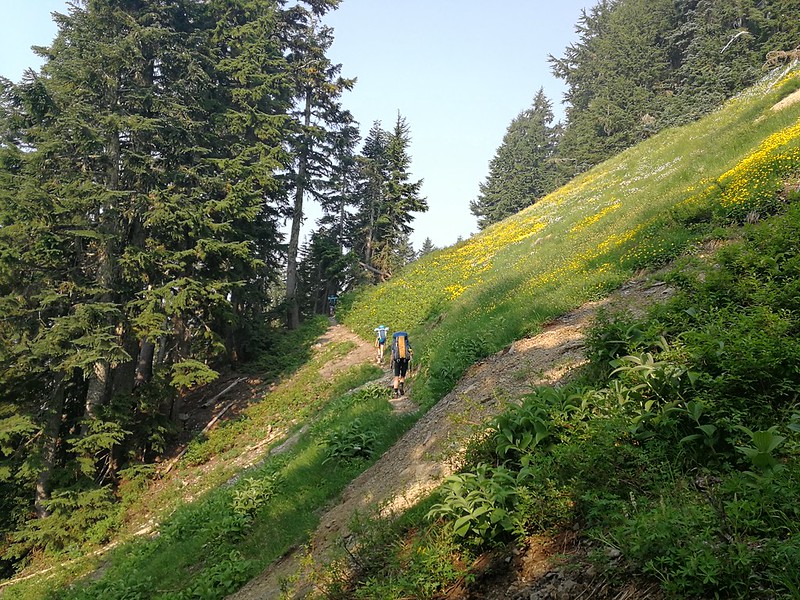 Shady North-Westerly side on Brunswick had a couple of icy snow patches. But they were small and easily bypassed. 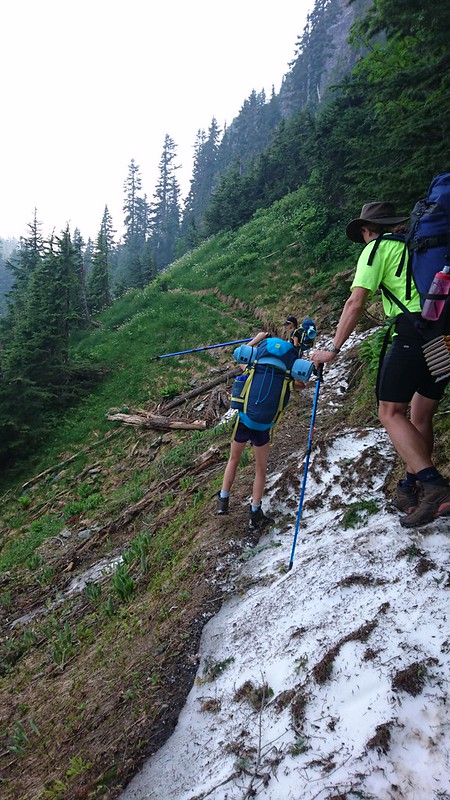 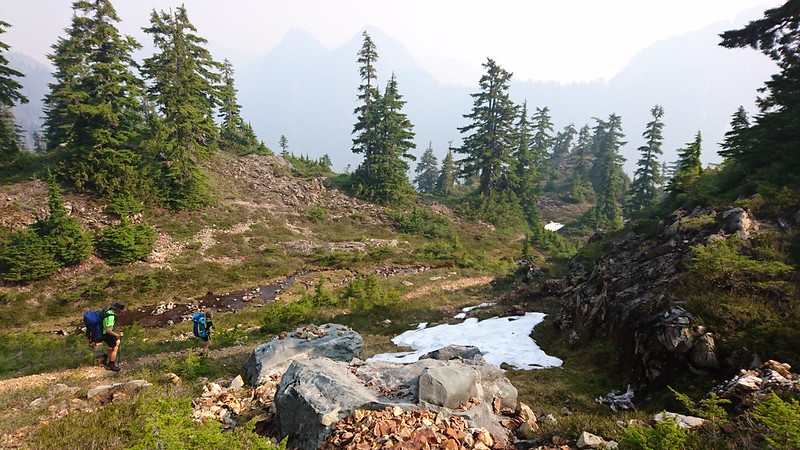 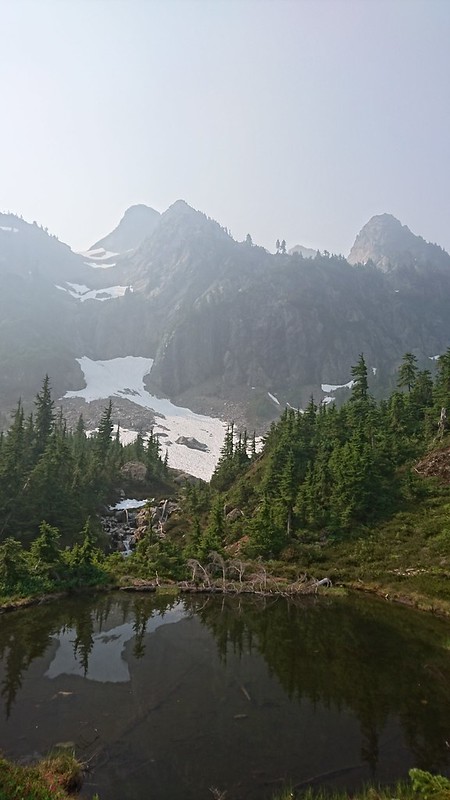 The valley we are going to follow. Does anyone know the names of two peaks in the middle? I didnt find any names for them on a map. 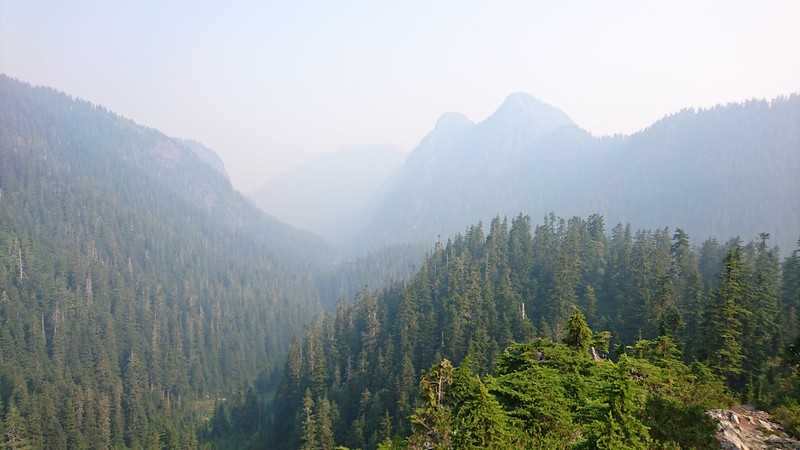 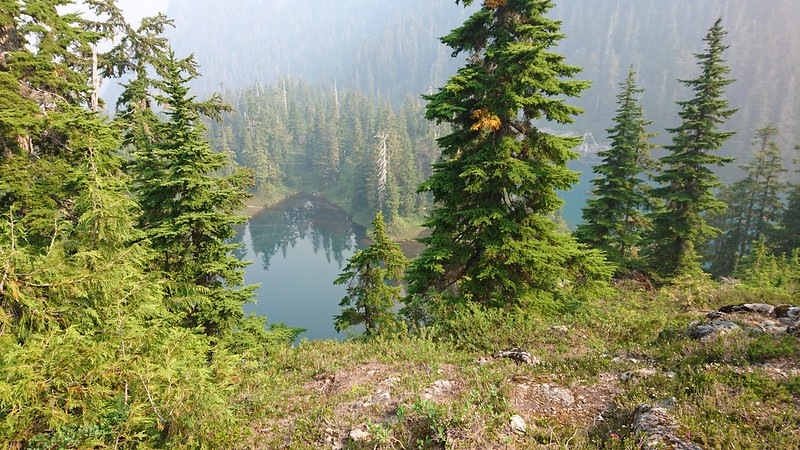 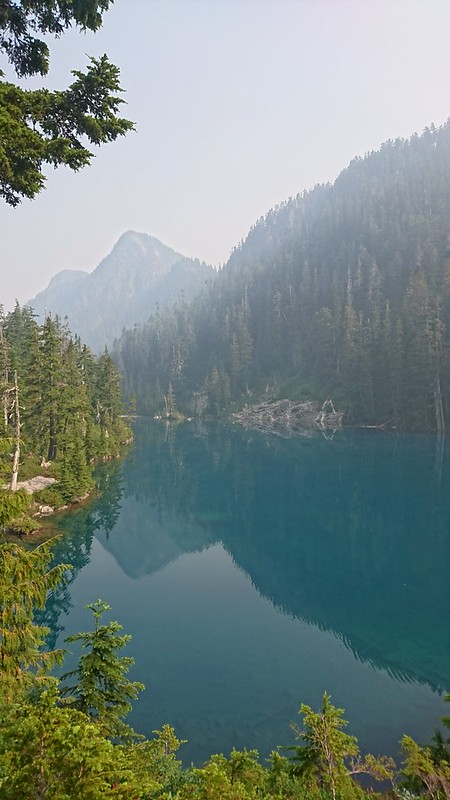 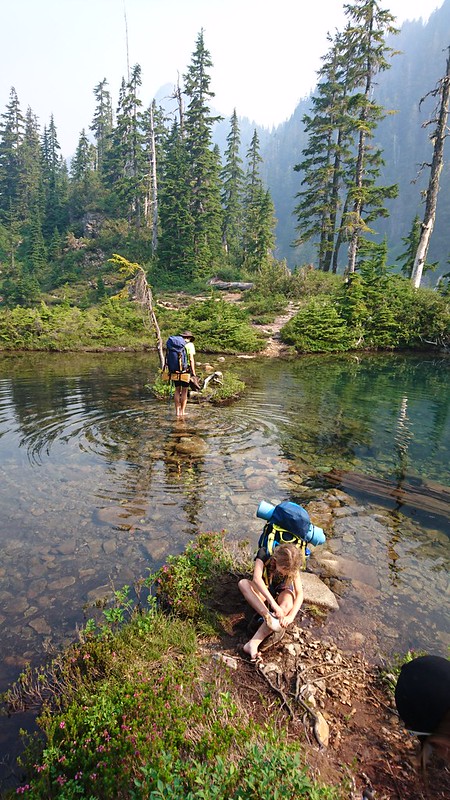 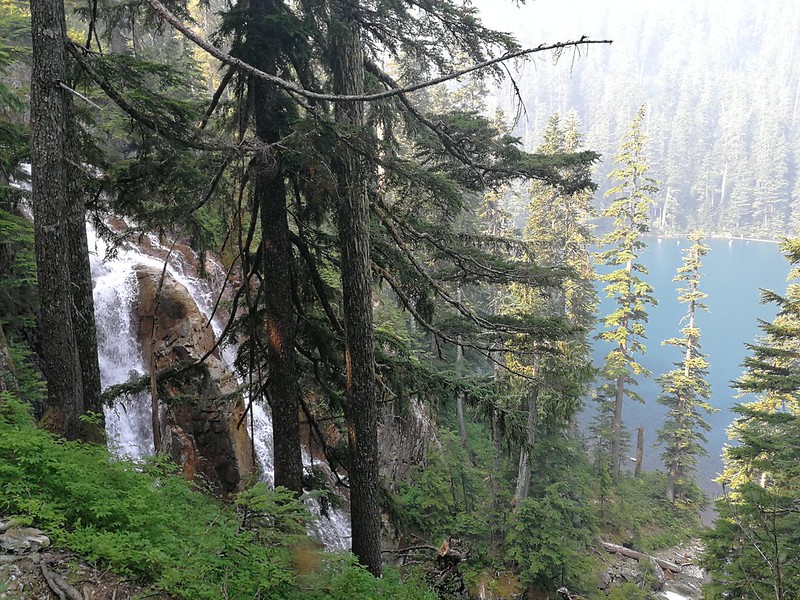 Waterfall between Brunswick and Hannover lakes from a different point. 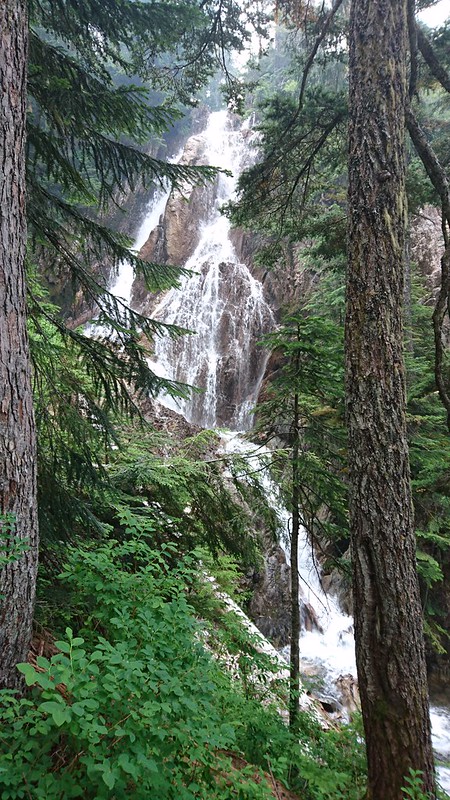 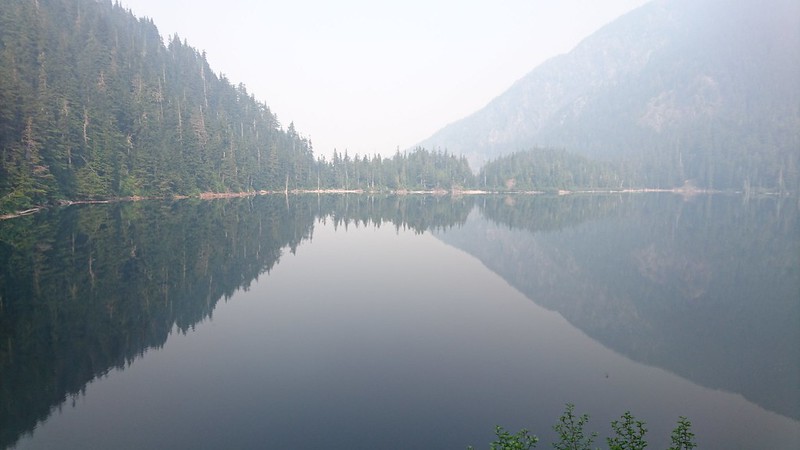 Crossing the snow patch at Deeks lake. We stopped there for a swim. It was awesome, very refreshing. 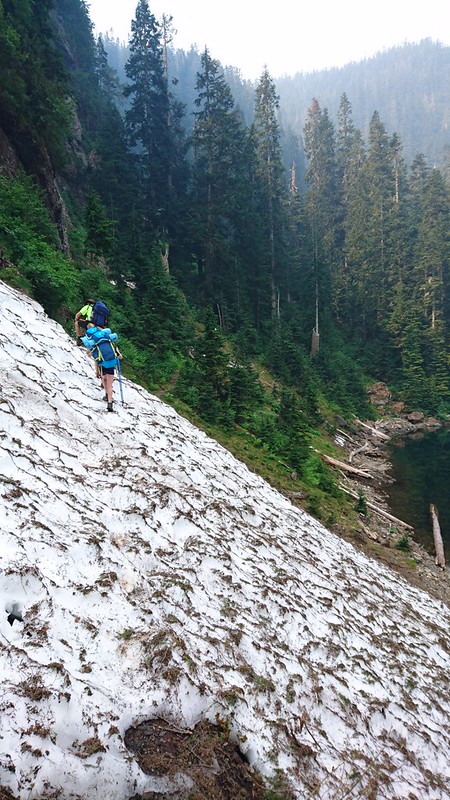 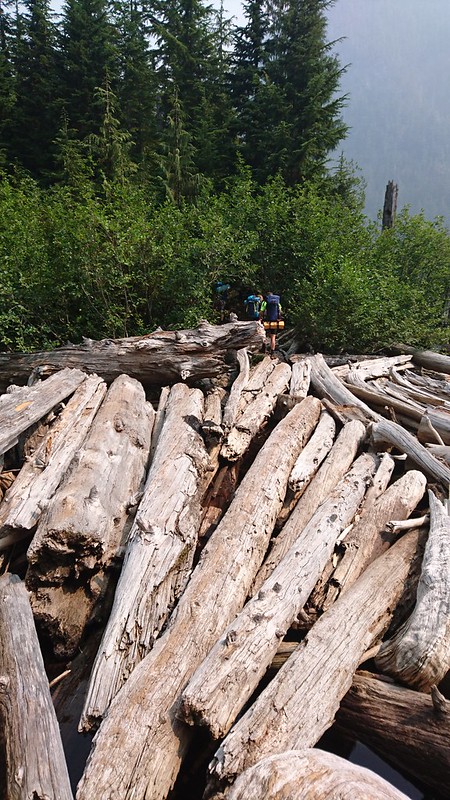 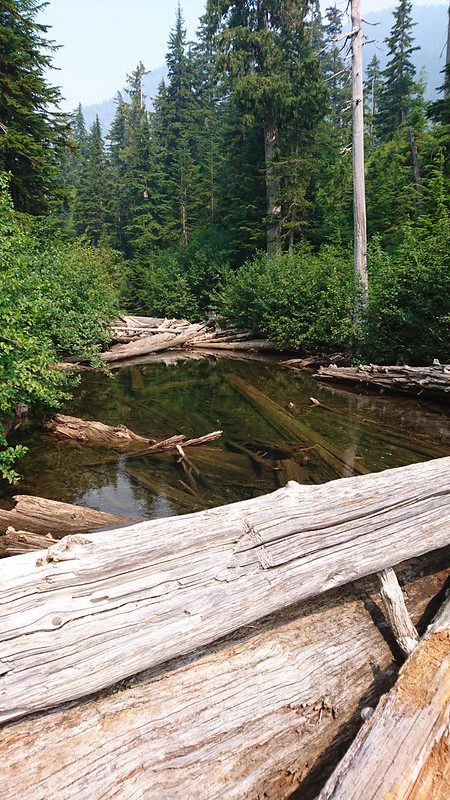 Overall the trail left pretty good impression. The time it took us to hike all 29km is pretty average, nothing to brag about, 10 hrs Cypress-Magnesia + 5hrs Magnesia-Porteau Cove. But Im glad the kids were able to do it without complaining. We should do it again, some time in early fall, when the weather is still dry and clear, but it is not so hot anymore.
For a trail which doesnt see a crowds of people its in a good shape, well marked and is easy to follow. We met very few other people, two guys coming back to Cypress from the Lions, and after the Lions we caught up with another group on the trail, eventually getting ahead of them on Davids Peak - Hi guys, if you are reading this. Oh, and then there was a group of people in Brunswick lake shelter, but I dont know which way they were going, north or south.
martin, WildernessMan and leanoliv like this.
Reunite Pangea!
Together we can change the world!
Literally.
Great_Blue_Heron is offline
Quote

Thanks for the great trip report! Those pictures bring back memories! I did Brunwick last year, possibly the most terrifying ridge walk I've ever done in my life! I was also at Unnecessary Mountain on Saturday and I'm actually still sore from that adventure. Awesome to see that you're sharing the experiences with your family, great work! Pictures look awesome!

I personally appreciate all these trip reports as I've been a lurker here for the last 2 years. I'm posting my own trip reports to give back to this awesome community. Your efforts are well recognized!
Great_Blue_Heron likes this.

Yes, and here's one of all time great CT reports on Gotha/Coburg circuit:

Great, thank you people for the names of the peaks.
Reunite Pangea!
Together we can change the world!
Literally.
Great_Blue_Heron is offline
Quote
post #6 of (permalink) Old 08-15-2017, 01:07 PM
martin
Summit Master

Excellent report, looks like a good time despite the smoke. Thank you!
Great_Blue_Heron likes this.
martin is offline
Quote
post #7 of (permalink) Old 08-16-2017, 06:01 PM
thecamel
High on the Mountain Top

Thanks. Good looking trip but I find it hard to believe the kids didn't complain at all!
My hiking career: a selfish pursuit or a pursuit of self?
thecamel is offline
Quote
post #8 of (permalink) Old 08-16-2017, 06:52 PM
Dru
Super Moderator

Quote:
Originally Posted by russellcoffin View Post
Believe the two peaks are called Gotha (Pk. 5400) and Coburg - correct me if I am wrong.
They are officially unnamed, although those names have been used for the past 10 yrs or so.
Dru is offline
Quote