Tenquille lake and Mt.McLeod, July 2-3, 2017
Apparently there is a lack of new trip-reports for Tenquille lake area. So, I'll add mine. It's a month old now, but I don't think that condition of Branch 12 FSR changed much, though Birkenhead\Tenquille approach might have became better. Also, by now there should be way less snow, than it was a month ago.

On Canada Day long weekend Ive got unexpected opportunity to go backcountry camping and we decided to go to Tenquille lake area and climb one or two of the peaks around it.
Tenquille lake is located North-West of Pemberton, high in the mountains above Lillooet river valley. There are three ways to reach it: via Birken-Tenquille Main FSR and Birnekhead river/Tenquille creek branch, the shortest trail with least elevation gain; via Hurley FSR and Branch 12 road, most popular, relatively short; via Upper Lillooet road, gaining all the elevation (~1450m) on foot, its also the longest option. I chose the second approach, via Hurley FSR and Branch 12, because recent reports claimed that Branch 12 was in good condition and all cross-ditches could be easily negotiated with a high-clearance vehicle, while I had absolutely no information about conditions of Birnekhead river/Tenquille creek branch road. As a side note, at the lake we met a couple, who came via Tenquille creek road, and they said that currently it is not fully passable by car because of high water levels in creeks crossing the road.
So, on Sunday, July 2, we left as early as I could wake up on a weekend and by about 10am reached Pemberton, filled up on gas and continued to Upper Lilloet rd, crossed the bridge over Lillooet river, noticed a bunch of cars parked near it, but didnt think anyone would take a longest route to the lake, when there are shorter options available. Hurley FSR was in great condition, but very dry and dusty, Branch 12 was ok too. Cross-ditches were indeed pretty deep and were spaced pretty close together. After crawling uphill for a while I noticed a strange sound coming from outside, from under our car. We stopped to investigate, and what do ya think? We had a flat! Nice But what happened next surprised me a lot, it turned out that my partner is extremely lucky person. He drove that car for close to 10 years in all sorts of conditions on all sorts of roads and never had a flat tire! So, he didnt even know how to get the spare out and if the spare was in working condition. Wow. We had to replace punctured tires so many times, that I know all local tire services. Once we lost two tires on a single trip!
So, we spent about 30-40 minutes replacing the tire and inflating the spare, then continued to the parking lot.
Flowers on a side of the road. 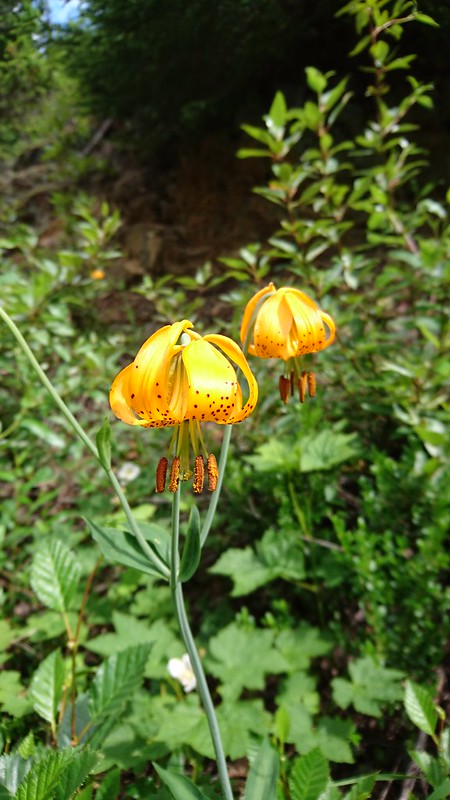 On the parking lot we counted 7 trucks and SUVs, and two more cars down the road. That automatically meant that campground and the hut at the lake were crowded. But we hoped that some people will leave today and we will be able to find a good spot for a tent.
At the trailhead we found a very nice map of routes to the lake and around it. I wasnt aware, but it turned out that there are a lot of trails and one can spend several days exploring the area. Keywords for searching more info are Tenquille - Owl lakes recreation area 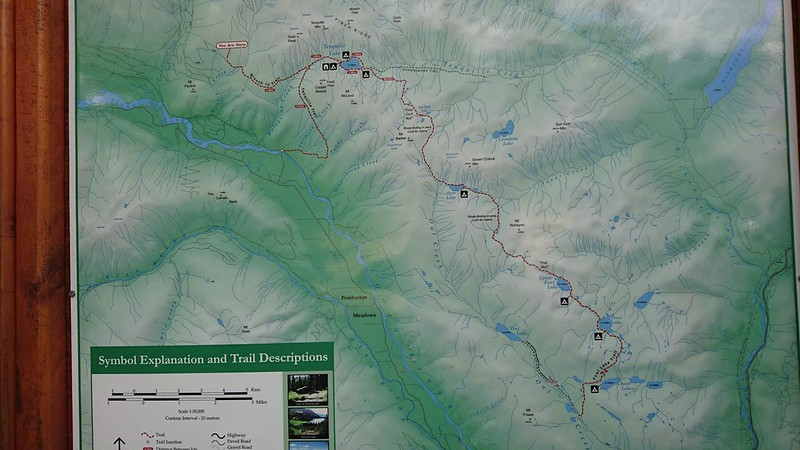 We hit the trail just a tad after noon. It was already pretty hot, but most part of the trail is in a forest, shaded from the sun, so we didnt melt.
After a while we met first group going back to parking lot, then another one, and then two more.
First view-point. So, what do we see here? Here we see Lillooet river valley and if we take a harder look then we notice Mt.Meager volcanic complex in the distance. 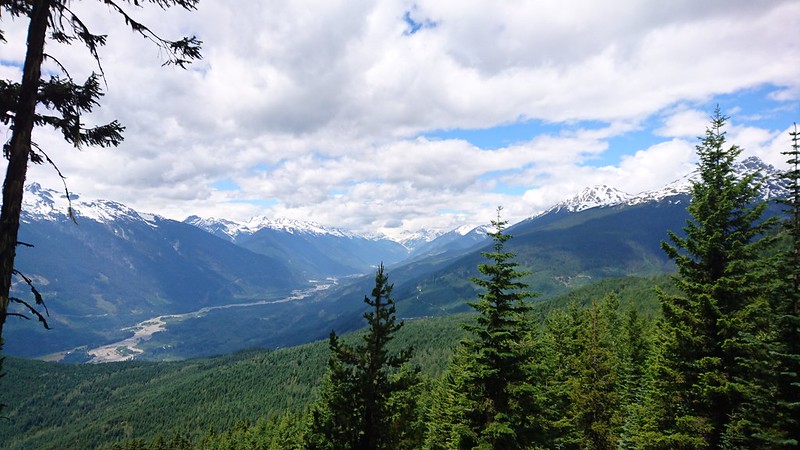 This picture was taken farther up the trail, in Wolverine creek valley. Pemberton is somewhere there, behind these trees. 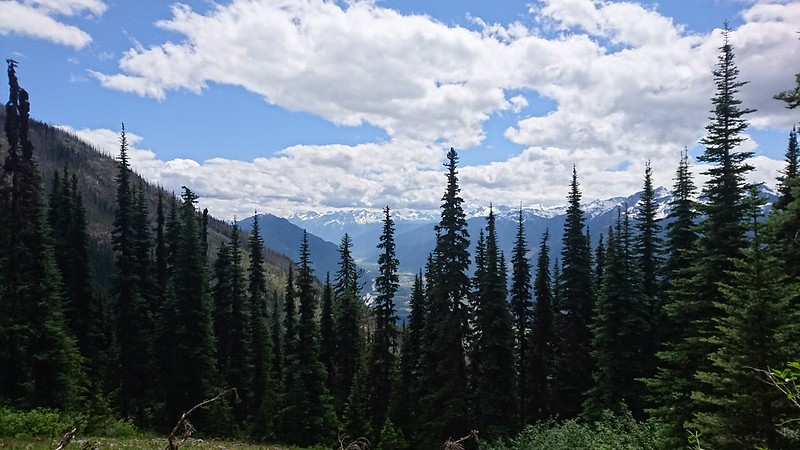 This is Copper Mound. There is a mineral claim on a North-West side of it, but it cannot be seen right now, there is still too much snow. 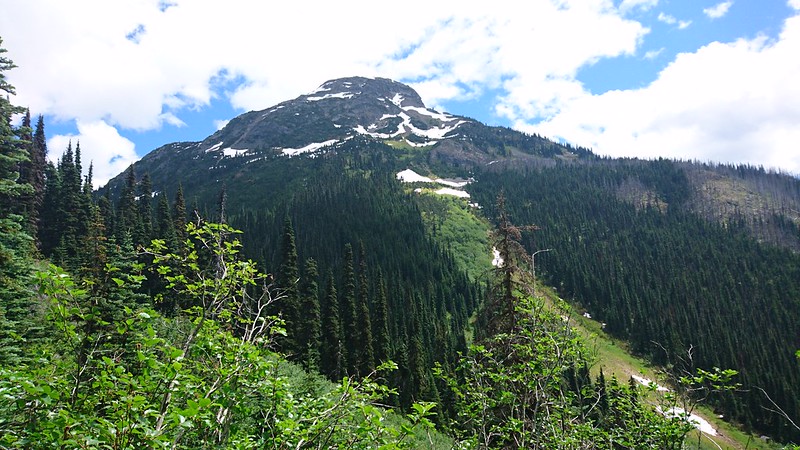 One of the perks of Tenquille lake are is its rich mineral exploration history. There are about 10 claims in the mountains near the lake. None of them turned into a proper mines, deposits were not rich enough to justify full-scale mining, but some had extensive exploration with one to five adits driven deep into the rock. I brought with me a map of the claims and detailed descriptions for each showing or prospect, intending to explore old worksites if time allows.

The pass between Goat mtn. and Copper Mound turned out to be very wide and kind of flat. Drainage divide was not noticeable at all. Only while walking in open meadows you suddenly realize that all the streams dont flow anymore towards you and into Wolverine creek, but flow away from you, into Tenquille lake.
For a beginning of July there were was way too much snow in the meadows. It was melting rapidly, creating a total mess - mushy snow, running water everywhere, oversaturated slippery dirt.
A view of Goat mtn. 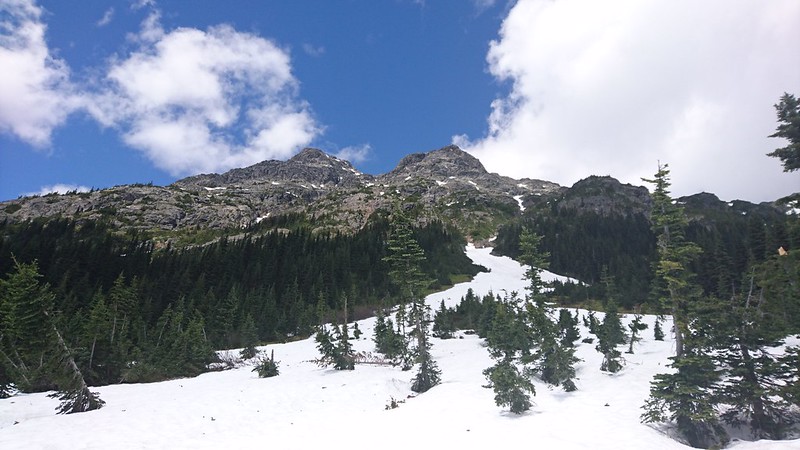 Meadows, Copper Mound and Fossil Pass between it and Mt. McLeod. 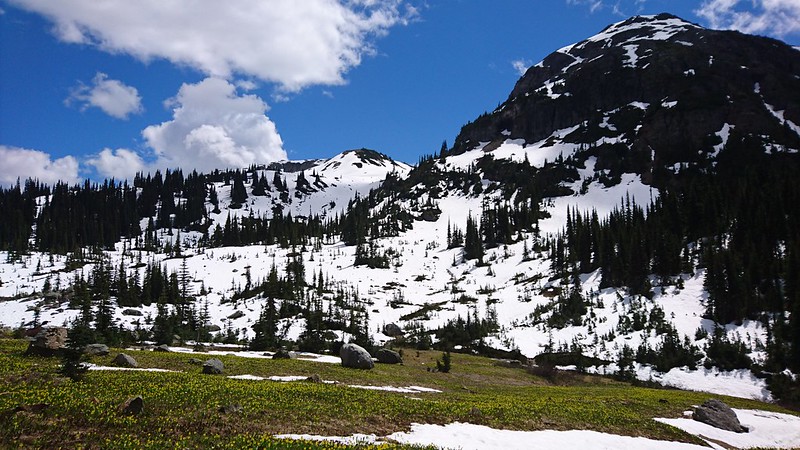 Seeing so much snow in the meadows I expected to find the lake frozen. But the lake was absolutely free from ice. I had a thought about taking a dip in the lake, but it was pretty windy and cold, so the idea of swimming was quickly abandoned.
There is the hut. I should tell more about it. I don't remember who built the original Tenquille lake hut, only that it was built in the 40-ties. The old building deteriorated, was torn down and a new beautiful cabin was built in 2011 to replace it. It was rebuild by members of Pemberton Wildlife Association with financial help from the province of BC. The cabin is open to public, does not require reservation or payment, though monetary donations are always appreciated. It is large, can sleep up to 20 people, has a wood stove, LED battery powered lighting, tables, benches, kitchen corner, some dishes and cutlery and is simply awesome. Its even better than Wendy Thompson Hut in my opinion (but nothing can beat Elfin lakes shelter in Garibaldi park). 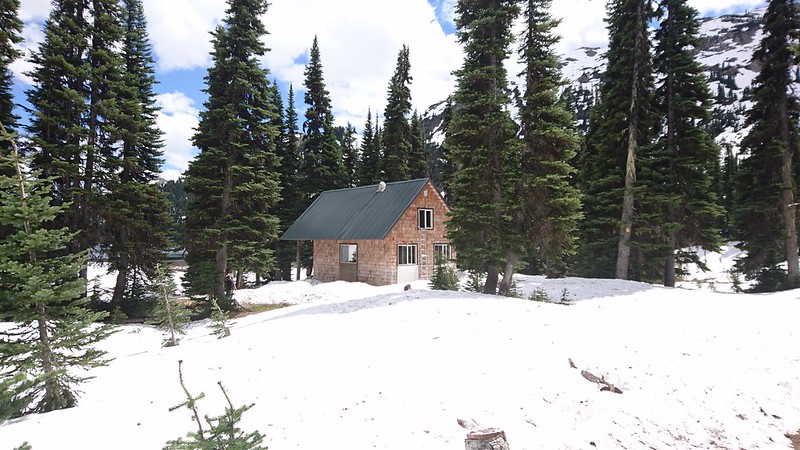 We had an idea of sleeping in the hut, but found it way too crowded for our liking. There were a few small groups and two large groups of youth, who stayed there since Saturday and really enjoyed their stay. Empty beer and liquor bottles as well as a light smell of weed spoke clearly about it. Dont get me wrong, they were nice people, they cleaned up after themselves very well upon departure. So, we left our backpacks near the cabin and took a walk around looking for a snow-free dry spot to pitch a tent.
Copper Mound on the right, on the left is low part of Mt.McLeod. Structure with red roof is some meteorological station, for snow measuring or something. There were signs asking not to approach it and not to disturb anything, so I didnt. 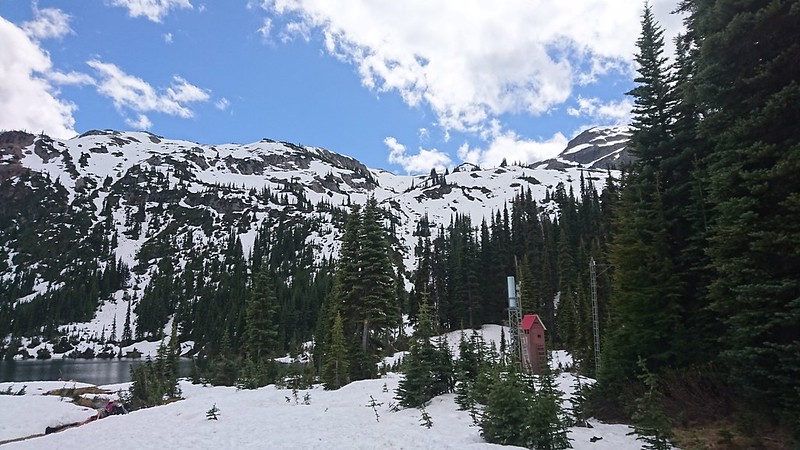 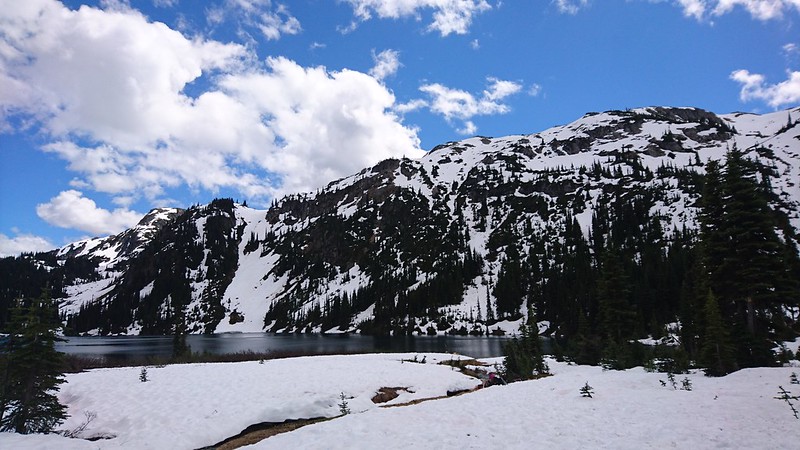 The amount of snow around the lake made the task of finding a suitable camping spot pretty difficult. We returned to the hut and took a look inside, perhaps it was not too crowded as I initially thought.
Sleeping area in the loft. Yup, its packed. 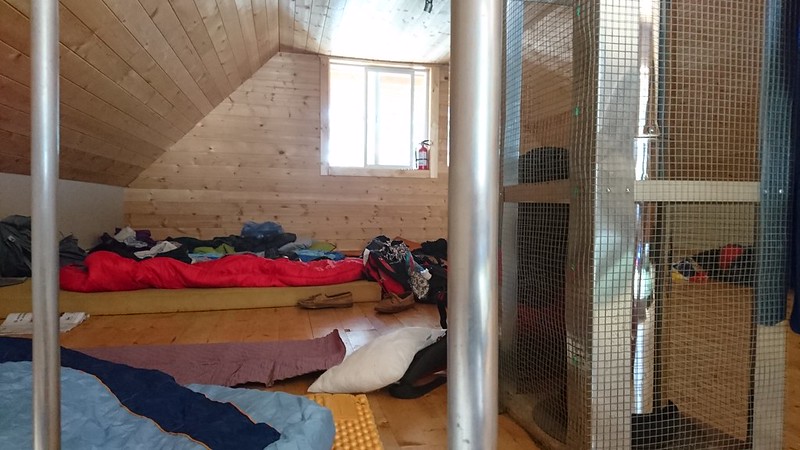 First floor. This and next pictures were taken on Monday, when everybody left. 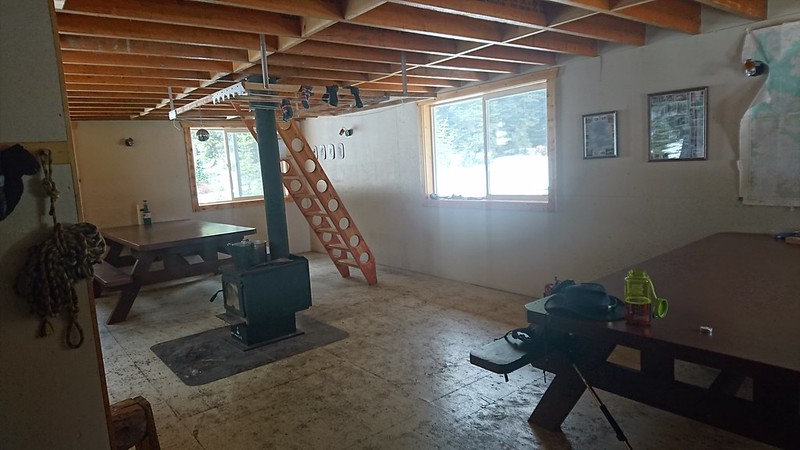 Then we took another walk around the hut and the campsite. This time we settled on a remote spot under a large tree. The snow melted around the tree and the center of that spot was more or less dry. It was pretty good spot, far enough from the cabin to not be bothered by noise and still close enough to go there for meals.
We set the tent, had a snack and mused about our plans. I wanted to climb Mt.Tenquille and Mt.McLeod or may be Copper Mound. Mt.Tenquille intimidated me by its steepness and lack of clear ascent route, so, we chose Mt.McLeod. The summit of Mt.McLeod is not visible from the lake, which makes it less intimidating, also I noticed a trail, leading up its shoulder. So, off to McLeod we went.
Lake Tenquille. 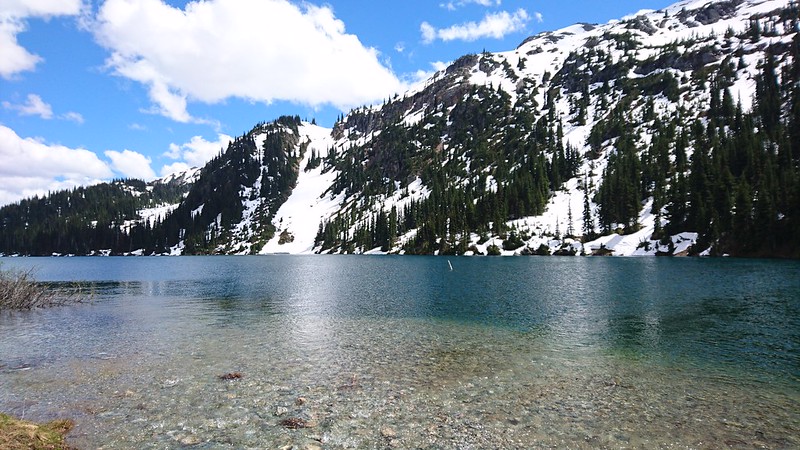 Dont know what happened to camera here and what this greenish tint is. This is our ascend route - straight up aiming to the left col between McLeods shoulder and Fossil Pass. 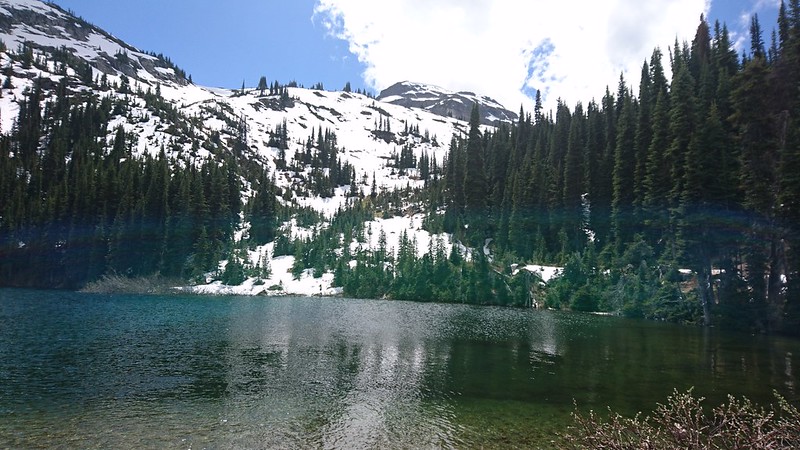 Almost reached the col and discovered that it is better to go straight up on the left side. It is a bit steeper, but way shorter. This approach may not be doable when snow melts, but right now it was perfect. 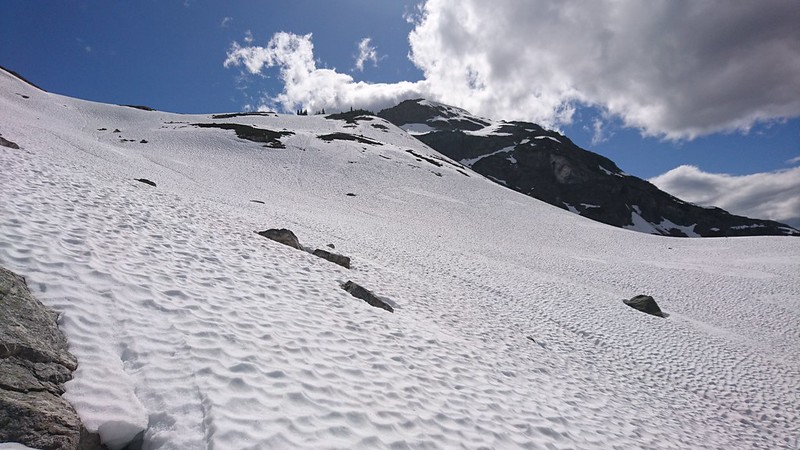 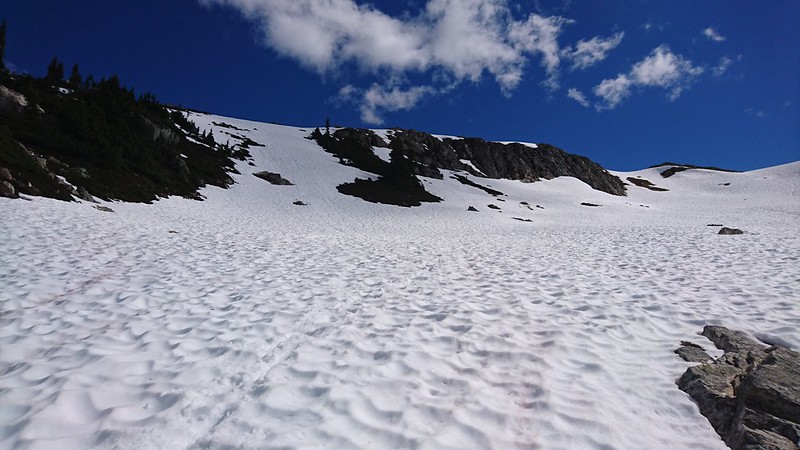 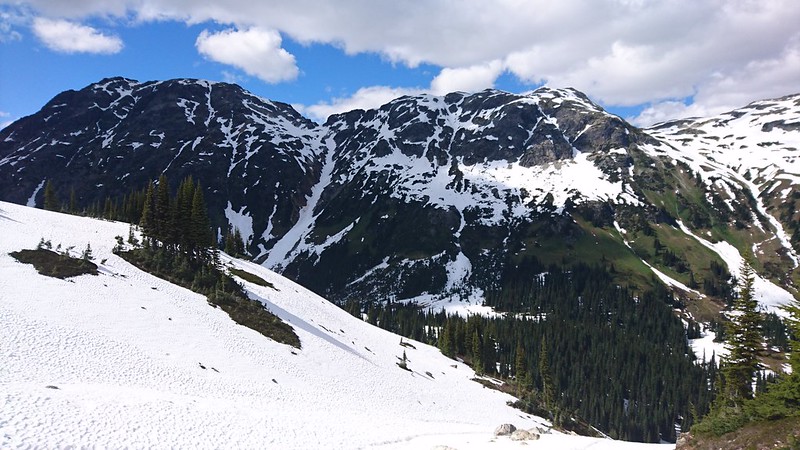 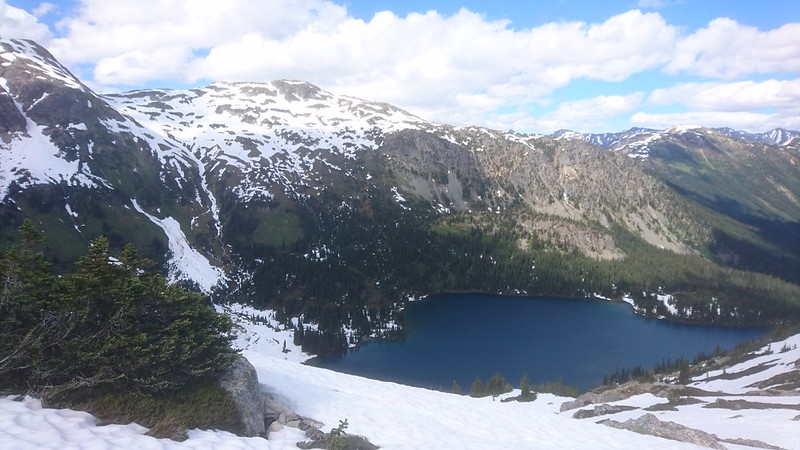 Only at home I realized that I have no pictures of Mt.McLeods summit. Well, its ok, Ill do it next time.
This is a view north-west into Lilloett river valley. 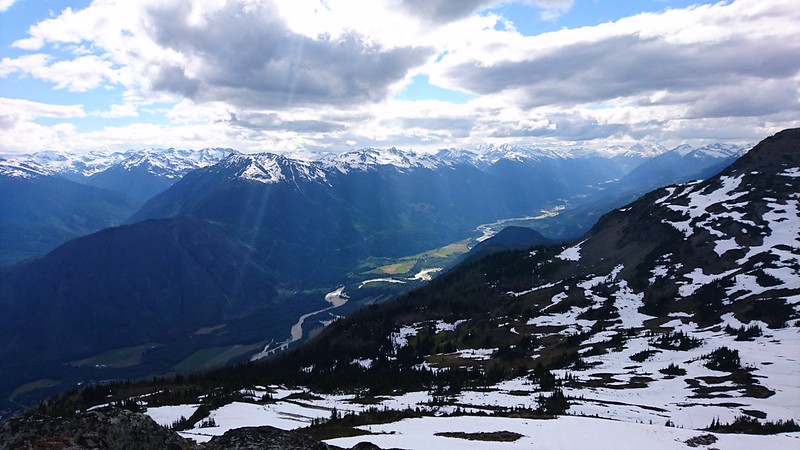 Up there on the ridge and the summit it was so windy I had to hold my hat by hands to prevent it from flying away.
Copper Mound looks from here like a mere pimple, comparing to Goat and Tenquille mtns. 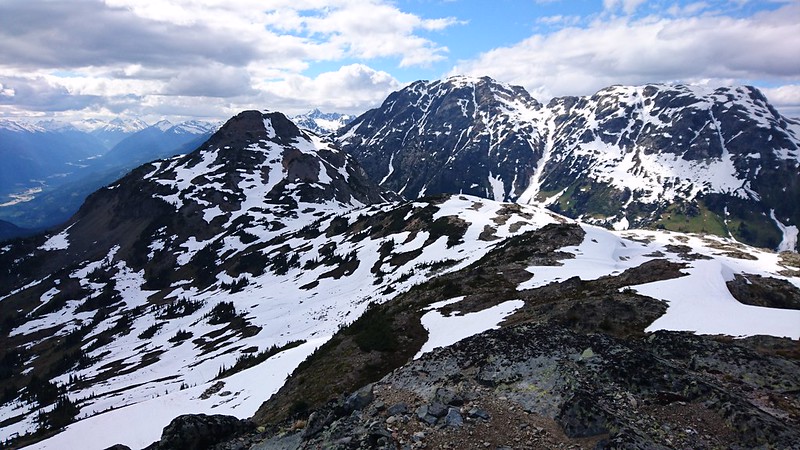 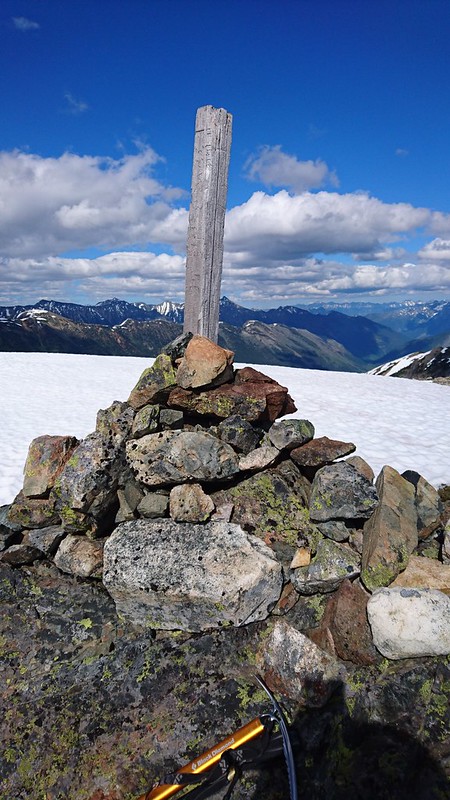 McLeods neighbour - Mt.Barbour. Now it became clear to me what attracted prospectors into this area. This is where mineralization is visible on a surface. 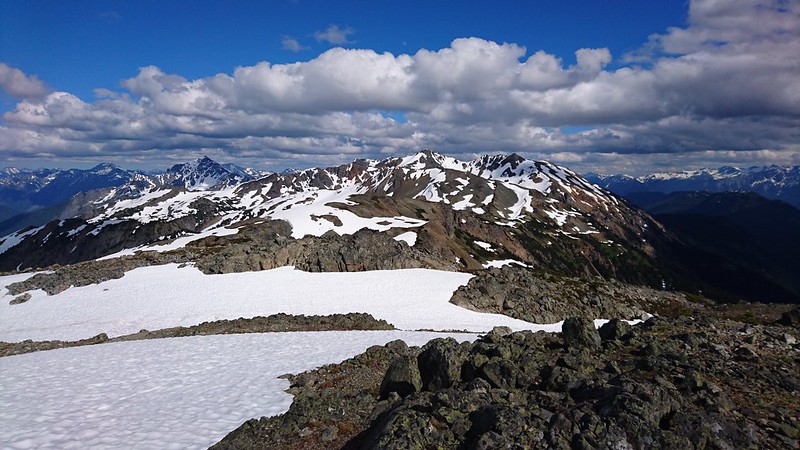 We didnt linger long on the summit, the wind threatened to blow us in the lake below. While descending we both unexpectedly postholed on a snow-covered rockslide. I was ok, but my partner hit a rock with a knee. There was no serious injury, just a large bruise, but bruising a knee is always very painful. So, we went straight to the camp and didnt explore anything else, had dinner and went to sleep early.
I didnt set an alarm clock, and we woke up at about 9 am, when it became too bright and warm to sleep. I think we were the last people in the camp to wake up. When we came to the cabin for breakfast all other people already had their meals and were packing, and some groups have already left. We were not in a hurry and took our time. The knee still hurt, so trip to the summit of Mt.Tenquille was out of the question. We settled for hiking around the lake with side trips to old prospects between McLeod and Barbour.
Lillies are flowering even before they fully pierce the snow cover. 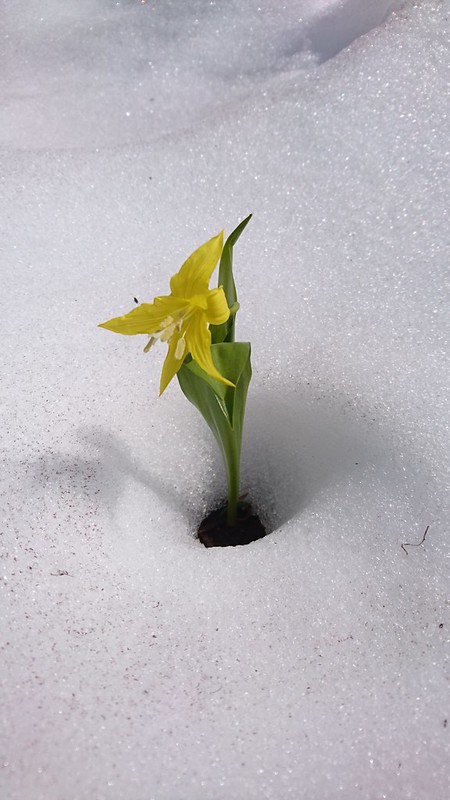 After crossing the meadow we discovered another campsite, which was not visible from the cabin. There was a group of people packing their camps. This area is certainly very popular and can be very crowded in summer. Well, technically it is summer right now, but I meant, when meadows around the lake are snow-free.
The trail around the lake was mostly hidden by snow. Sometimes it emerged from out of white cover, just to hide again under the waters of the lake. Lake level seems to be about 0.5m higher than usual
Opposite side, view towards Tenquille Pass. 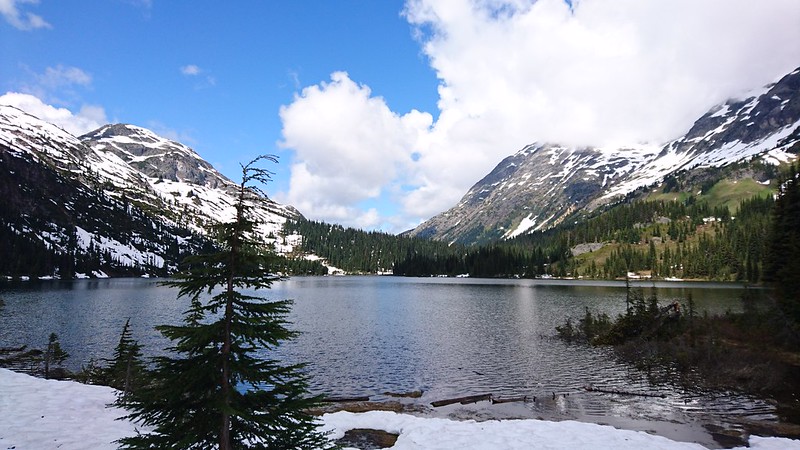 I expected to see a proper bridge across Tenquille lake, but instead we only found a log jam. Crossing it without wetting our feet was a bit tricky, but quite possible. 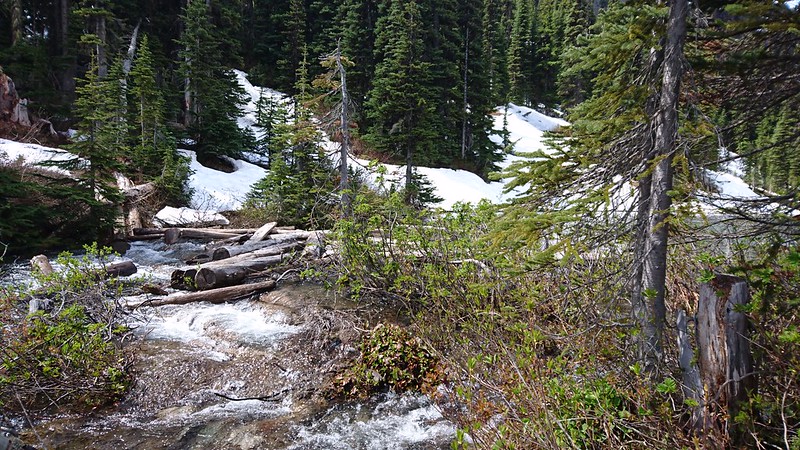 On the other side we found a trail, coming from Tenquille creek valley.
After completing the circle, we went into the cabin one more time to take pictures without the crowd, had a snack, packed our camp and headed back to the car.
The trip home was uneventful, driving for four hours was tiring, but the whole trip left a great impression on me. The area of Tenquille lake is awesome and I want to come back there and explore more.
sidetrip likes this.
Reunite Pangea!
Together we can change the world!
Literally.
Last edited by Great_Blue_Heron; 08-12-2017 at 12:40 AM.
Great_Blue_Heron is offline
Quote