Floe Lake with a glimpse of winter
We went to Kootenay this weekend. I must admit I was hoping to do most of the Rockwall Trail. The last conditions report said up to 5 inches of snow on the passes  didnt sound too much to me.  but somehow I thought in advance things could come out differently.
So we started at the Floe Lake trailhead and left the car there. It was a beautiful sunny day with a few clouds in the beginning and the light in the Valley while we were going up was very special. We started later a bit before noon. Some fog down by the river, the sun just coming over the mountain to the left. 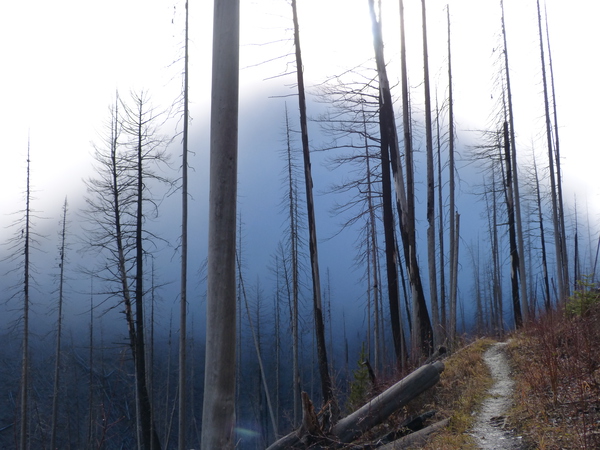 Before we reached shady slopes a group came down saying: we didnt make it to the lake, lots of snow up there. I was proud, I brought my beloved Norwegian red snow shovel. We also took microspikes  lesson learned last winter that these are really useful little things especially in shoulder season. And gaiters although I never wear them, just too hot. 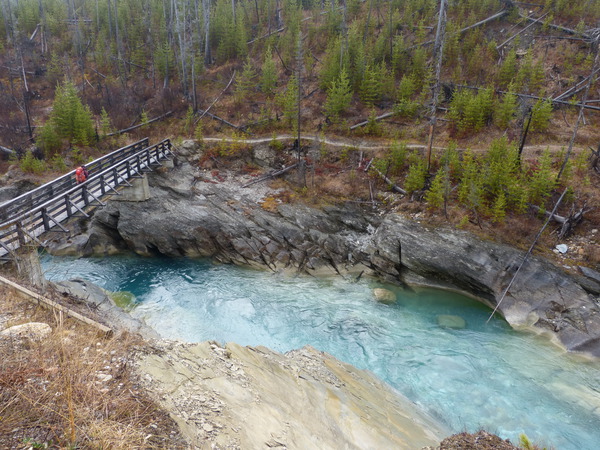 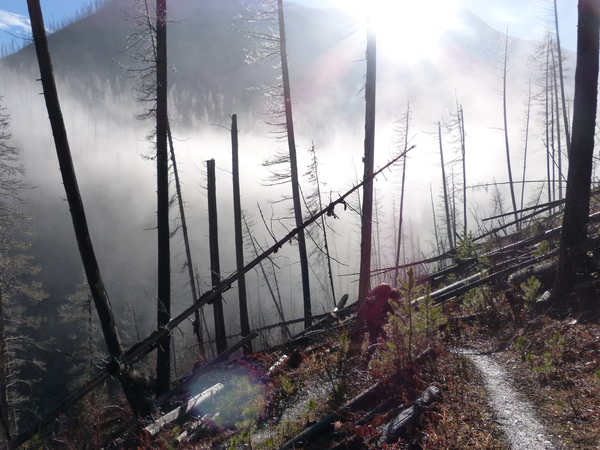 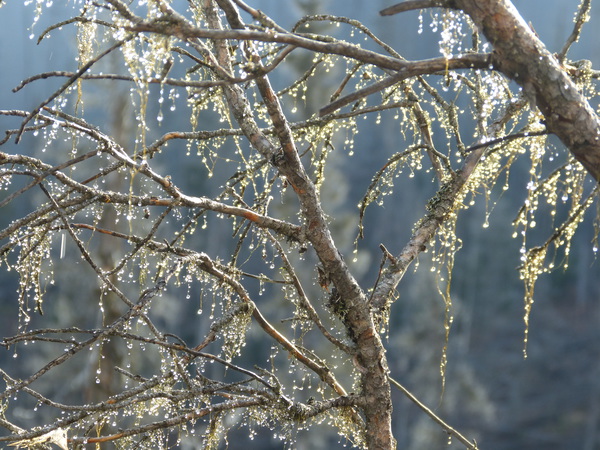 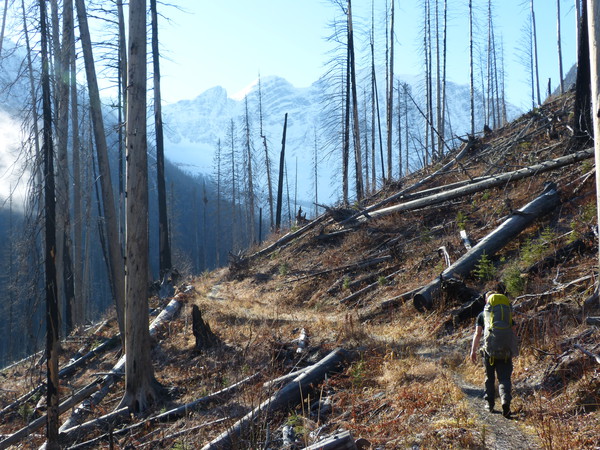 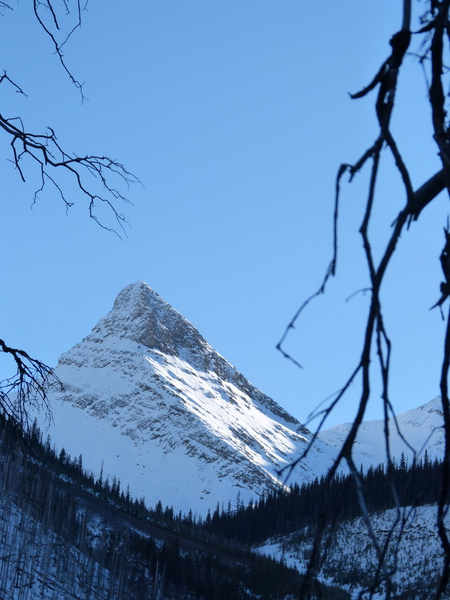 Snow was definitely increasing coming towards the end of the valley and starting the climb. I must also admit I wasnt informed in detail about the hike, just the general info: there are some ups and downs. So we were perhaps a little surprised that it went up quite steeply for quite a while in narrow switchbacks and the snow was becoming deeper (but a bit frozen, only some postholing here and there depending whether it holds or not ;-)). 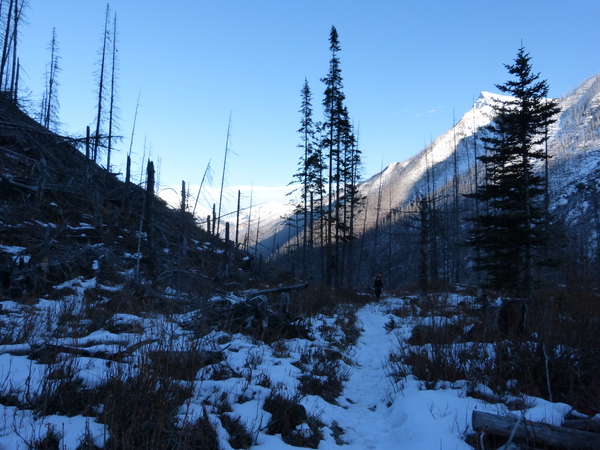 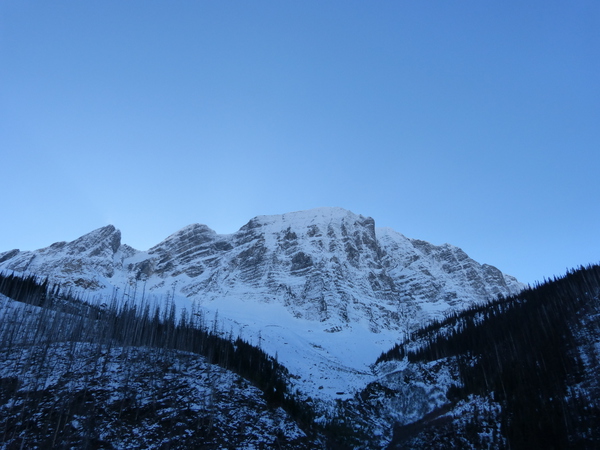 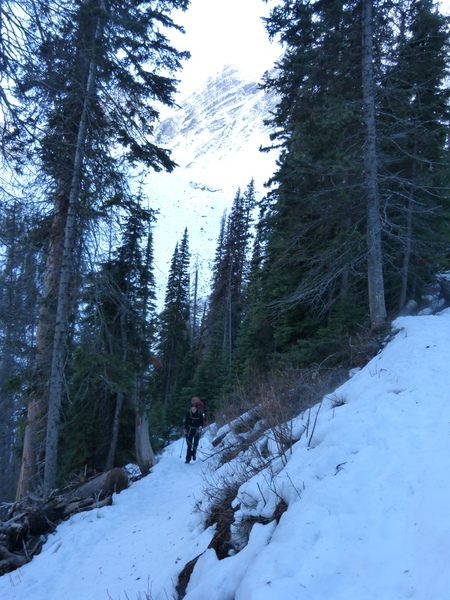 Reaching the end of the switchbacks it was clear: theres somehow more than a meter of snow around here. Going up we were lucky to always see the trail because someone must have been there a few days before with some kind of skis or snowmachine, there was a track. The backcountry campground sign was still visible between little snow-hills. Not far from there we saw some kind of bench under a tree and interpreted the place besides as a tent pad. I thought we better prepare the spot a bit. 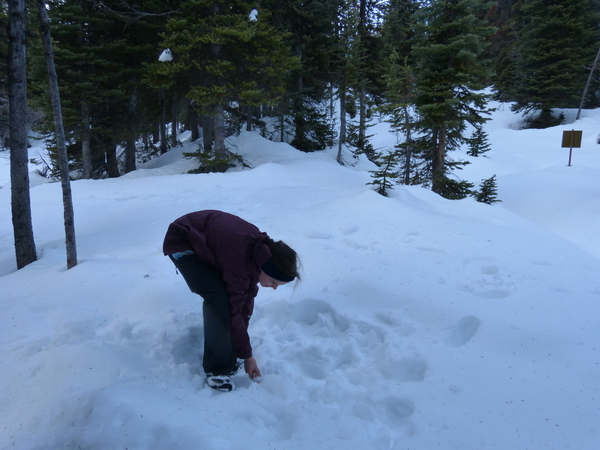 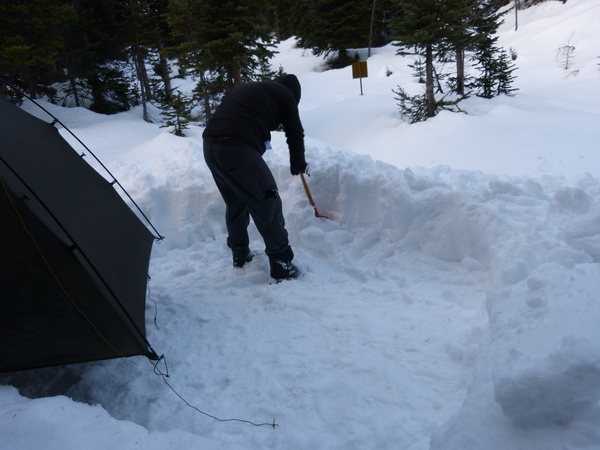 Bad exercise for the spine but the snow was fluffy enough, light and shoveling quite enjoyable  and kept us warm. It wasnt that cold by the way, no wind. I explored the area because the map said there should be a warden cabin, but after 30 m I saw the bearboxes down to the left and decided thats enough for exploration in this snowy hills. Nice glimpse to the shore of the lake standing in front of the boxes.

The big disadvantage when everything is covered in deep snow is always: where to sit and eat. We dont use lots of energy for preparations or constructing a site so we heated water beside the tent under the trees (the little bench, a plank, was icy, not suitable to sit) and for the first time we had a special outdoor meal made in its package no dishes. A slight improvement to last time when we were standing in front of the stairs of an outhouse eating an almost ready noodle dinner with wet feet while flurries started to fall on us) - even though we should have stirred more to mix the spices up from the ground  and we decided one package is enough for both of us. We still had bars.
There was no running water around so I managed at least to melt snow for another liter of water making tea in the thermos for the next day  already knowing we wouldnt prepare our usual coffee in the morning. Tooth brushing is usually skipped as well, too much effort.

We were ready in our sleeping bags around 5.40 p.m.  its getting dark soon. It was absolutely silent up there, no sound. The moon  later I learned tonight it will be the closest  illuminated the snow scenery, no need for headlamps outside. I think I heard some kind of deer or perhaps a moose at night, but never saw anything. Wind came up blowing over the lake but our spot was sheltered in the trees and within the shoveled snow walls.

At 5.30 in the morning it started to rain constantly. At 9 we decided to get up, it wasnt raining too hard. Nice to have a cup of tea, a bar and  pack everything out. The tent is wet for sure. It was warm. We used the gaiters and the microspikes, both helped but it was generally easy to go down. Too warm for rain pants till the last 3 km or so when it started to rain more and it was also considerably cooling down going down. So we were quite wet (like the camera) and cold and happy to reach the first of the two bridges and heading back to the car.
I really liked this valley especially in these conditions. We just didnt see much of Floe Lake, but Im looking forward to check it again without or at least less snow. 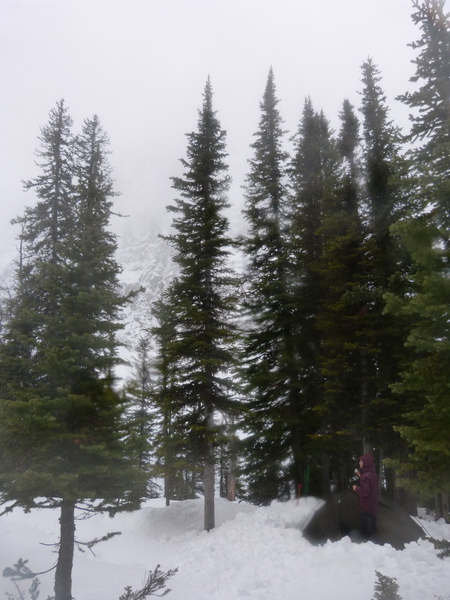 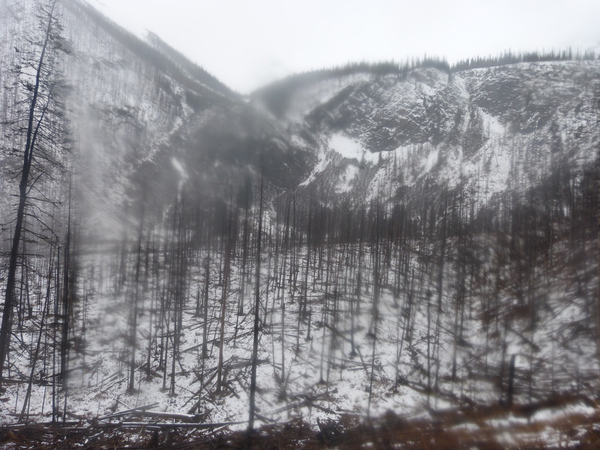 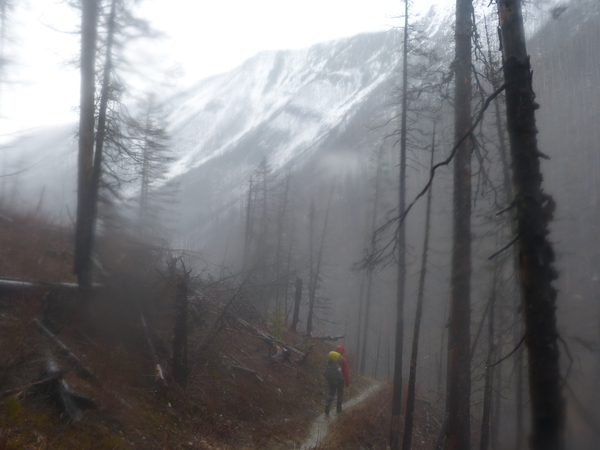 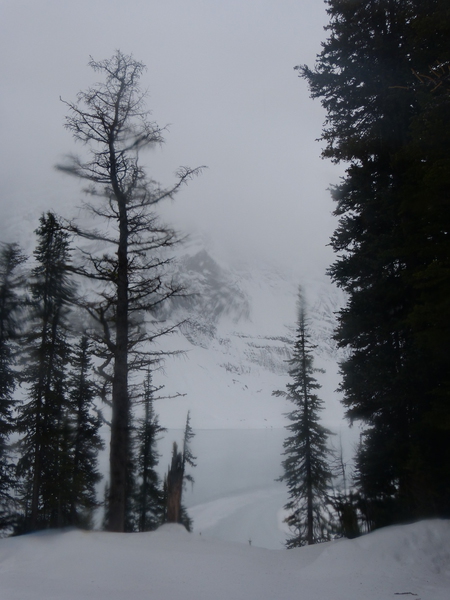 Trail Talk and TimeToGoHiking like this.
Kokanee75 is offline
Quote

There seems to be an issue with the photos, unfortunately..
They are blanked out, and I can see photos from other TRs on this computer no problem..

Sorry, should normally work... I can see them. They are not so impressive. ;-)

At least you got out and had "an experience". Shoulder season hiking has its risks. Nice to see people are still getting out, even in November.
alpalmer is offline
Quote
post #5 of (permalink) Old 11-14-2016, 10:02 PM
dougz
High on the Mountain Top

Huh.. weird. They show up on my home computer..

We did the Rockwall a couple years ago in July. Winter has it's advantages, Floe Lake was the buggiest of all 4 camps and the pikas were driving us nuts..
alpalmer likes this.
Who needs a signature? Mine is always: Last edited by dougz; Today at 03:27 PM
dougz is offline
Quote
post #6 of (permalink) Old 11-14-2016, 10:17 PM
Rachelo
Super Moderator

How odd - I'm the opposite. I read this TR earlier on one computer, and now on my home computer the images are all broken.
Rachelo is offline
Quote
post #7 of (permalink) Old 11-15-2016, 05:36 PM
martin
Summit Master

The images are hosted on a German photo site, abload.de. It is possible that your Sys admins at work have it blocked off.