Table Meadows - touching the Table
We went on a three day camping trip to Garibaldi Lake, Black Tusk, Mount Price and Table Meadows this long weekend with kids. We had a reservation at Garibaldi Lake campsite for July 30, 2016 and did Black Tusk scrambles summit on the same day. 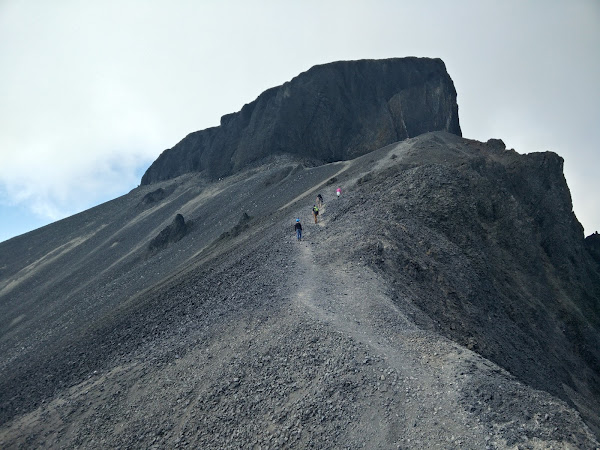 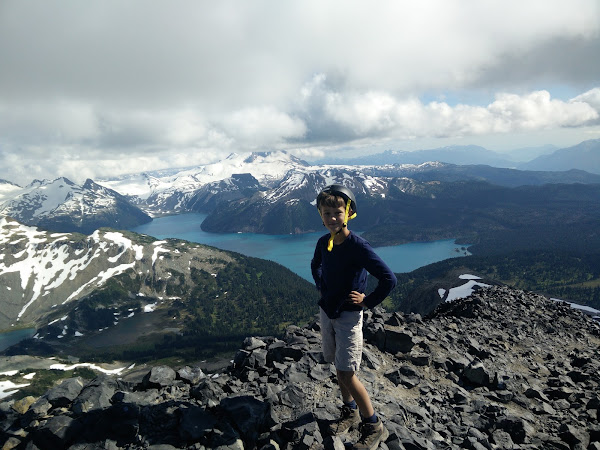 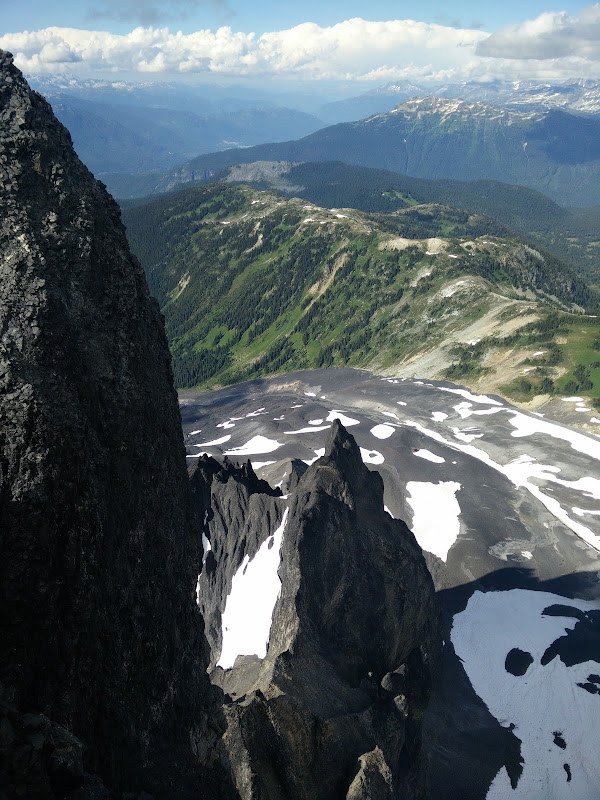 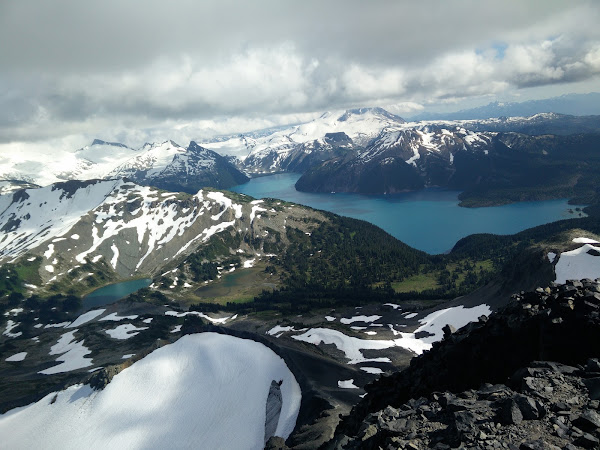 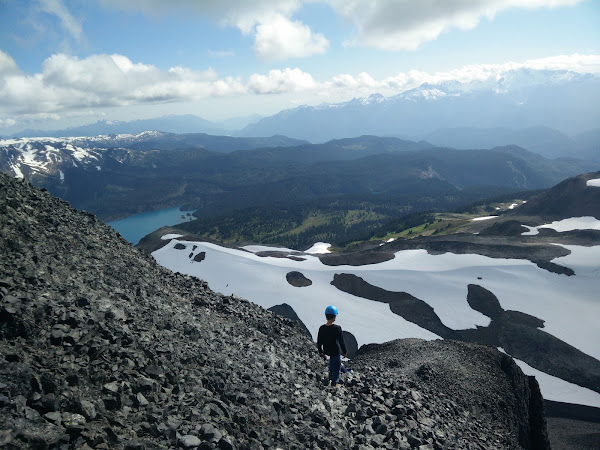 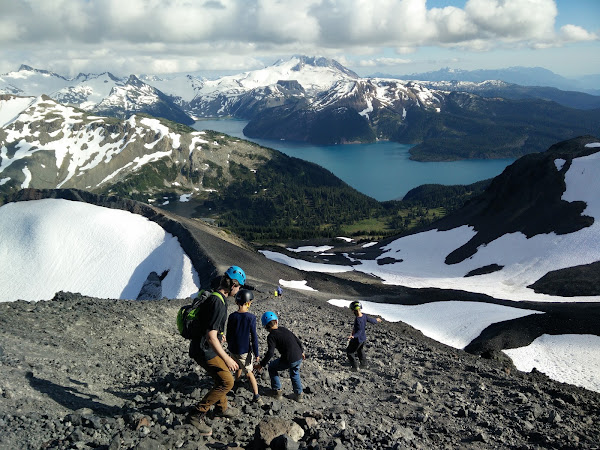 On the second day we scrambled up Mount Price summit. There are large patches of snow on Mount Price, but they are easy to bypass and do not require crampons to walk on. We decided to descend from Mount Price summit down a gully into Table Meadows. While this is clearly not the optimal route to Table Meadows, we managed to scramble down the first steep gully without incident and then tried to glide on the soft scree taking short turns. 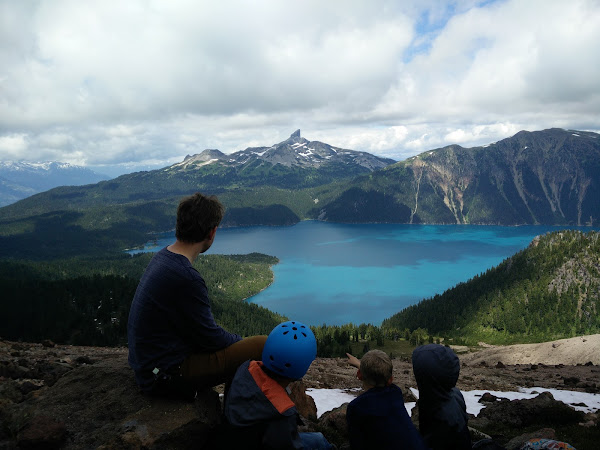 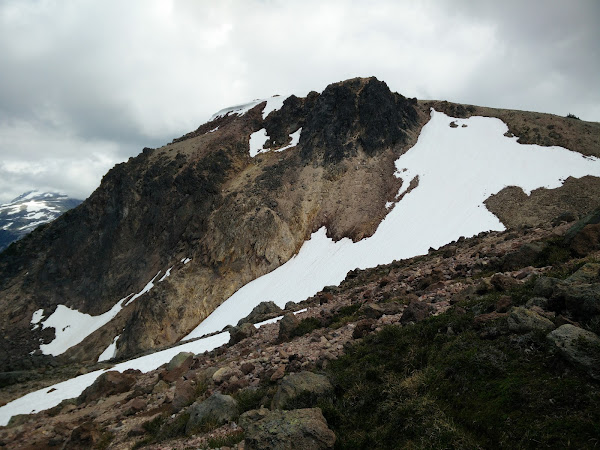 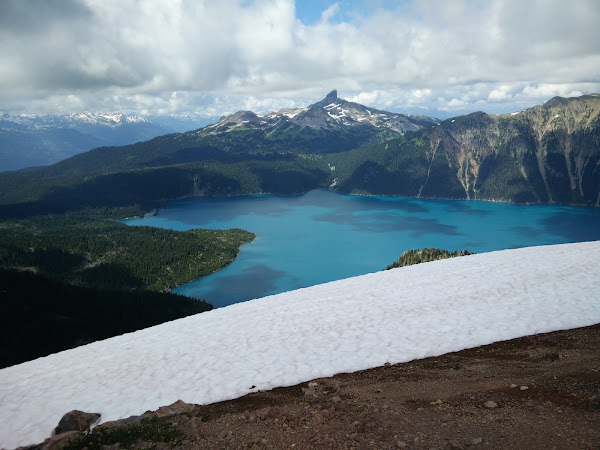 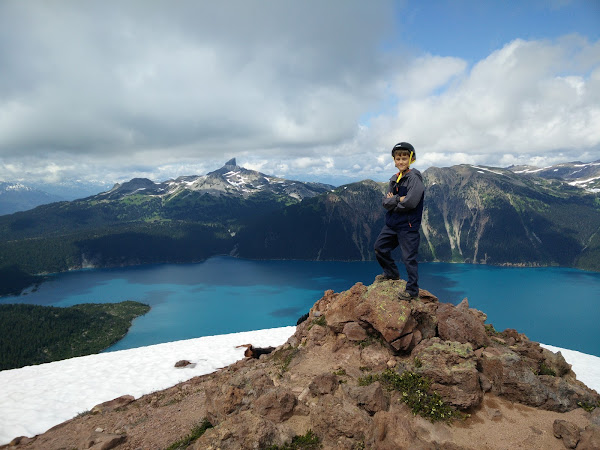 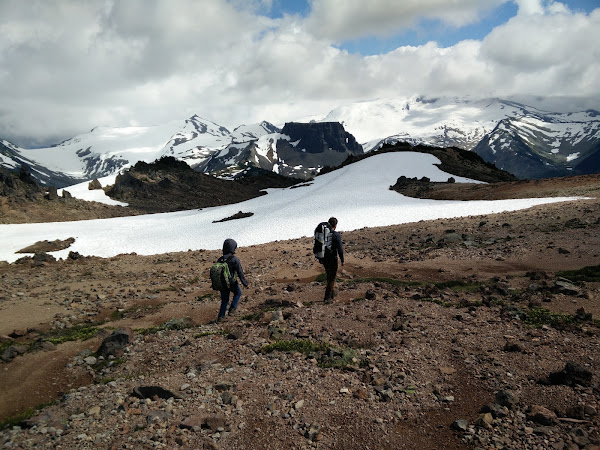 The worst thing that happened to us past Mount Price summit was a massive attack of mosquitoes all the way into Table Meadows and back. Mount Price appears to be a mysterious entry point into the mosquito kingdom. We applied repellent cream all the time, but the vicious critters continued their relentless kamikaze assault regardless. We had to wear wind breakers, hats and helmets to keep them off despite the hot weather.

We did some bushwhacking and a couple of extra ups and downs trying to find a path to Table Meadows, as there is no marked trail. At one point though we did see a lone orange mark at the end of the boulder field, but there were no other marks. It took us almost 4 hours to approach Table mountain, as the blood sucking critters did not allow us to think straight.

We scrambled up to touch the Table and camped in Table Meadows for the night.
On the third day we had better luck finding an easier ascending route to Mount Price via a dried creek green gully leading to Mount Price col. We could clearly see a trail with tracers of other hikers on it. It ended in a steep scree section, but it was relatively short, and we managed to scramble up using veggie belay in half an hour. It took us only 2.5 hours to cross Table Meadows and ascend Mount Price col, where we stopped for a lunch. We made another break at Garibaldi Lake for a snack and a refreshing swim. By 7 p.m. we were at the Rubble Creek parking lot. 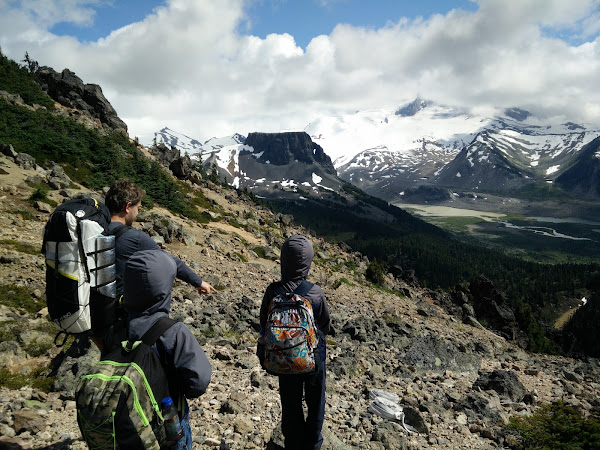 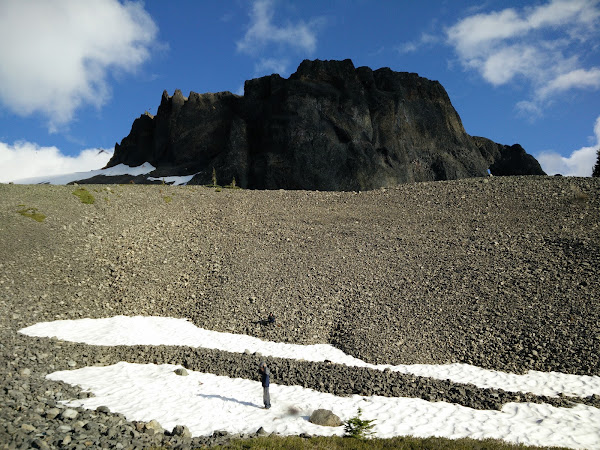 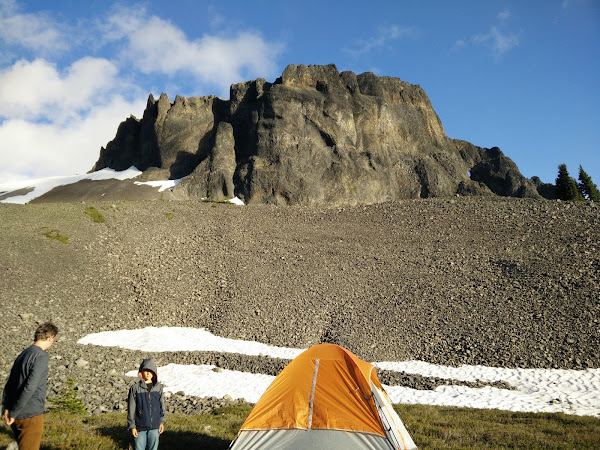 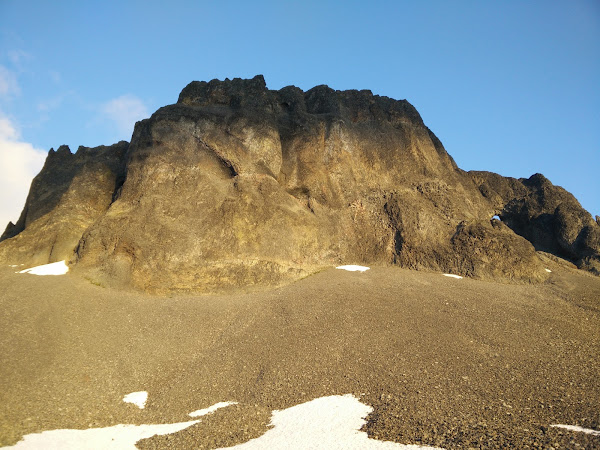 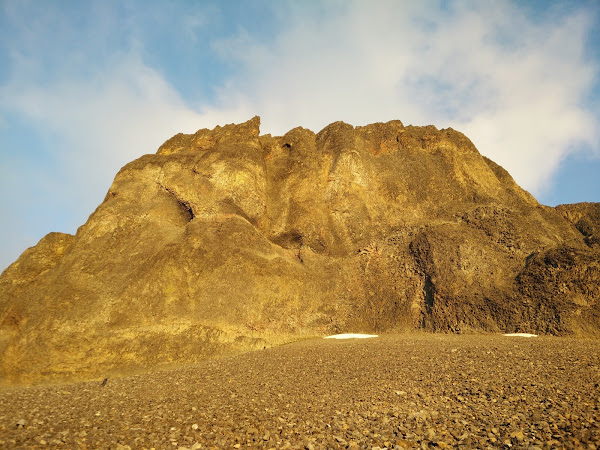 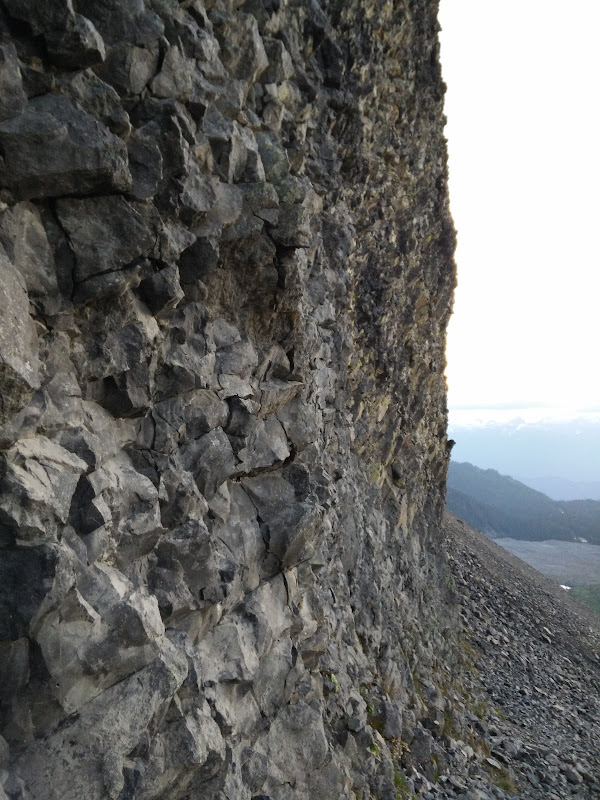 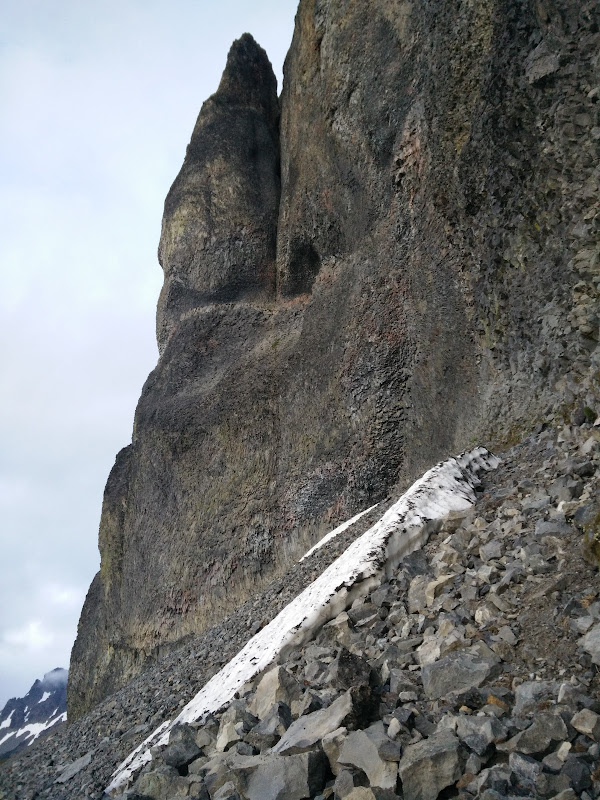 We hiked ~ 55 km in three days and touched the vertical wall of the Table. Surprisingly, it felt like solid rock pretty much like Black Tusk wall, except for the Handle which was all rotten rock. Unfortunately, we only had 2-2.5 hours of day light time left to explore Table Mountain this time, as the descent into Table Meadows took us much longer than expected. Also, we were not sure we would venture into Table Meadows with kids. We decided to keep all options open and made a final decision on the summit of Mount Price. Maybe next time without kids we will get more quality time exploring the Table. (But first mosquitoes in the Table Meadows must die! Last summer there were not as many critters there, so there is a hope that this is a passing thing).
happiestoutdoors, Dac-van, Masiar and 3 others like this.
Lenagen is offline
Quote

Impressive outing for the family!!
I'm almost curious to see how bad the mozzies are there now.

Table Meadows are fantastic! I day-hiked from Rubble few years back & this was probably the longest trip I've done on the Coast.

As far as best route down from Price/Clinker col: Most direct line is not the best line, as there are steep and bushy gullies that drain into Table Bay. Much easier is to aim in general direction of Garibaldi Mtn, then loop around just before terrain starts to drop again Lower line is my line out, while upper had that very awkward drop.

Wow, we never even thought about doing Table Meadows in one day! You must have hiked ~ 16-18 hours. The best we could do is Mount Price, Black Tusk and Panorama Ridge in one day each.
I should have drawn our descending and ascending routes for reference, just could not find a suitable picture. I will try to post it later here. For those contemplating a trip to Table Meadows I would recommend taking the second gully on the left (towards Mount Price) from the Mount Price col (the one between Mount Price and unnamed gorge between Mount Price and Clinker). It may look loose and steep but you can actually slide from side to side on the soft scree or use green bushes as belay - it is only about 50 meters of steep scree descent and then you will see a visible path down the dried creek gully.
Lenagen is offline
Quote
post #6 of (permalink) Old 08-03-2016, 10:29 PM
muskeeto
Off the Beaten Path 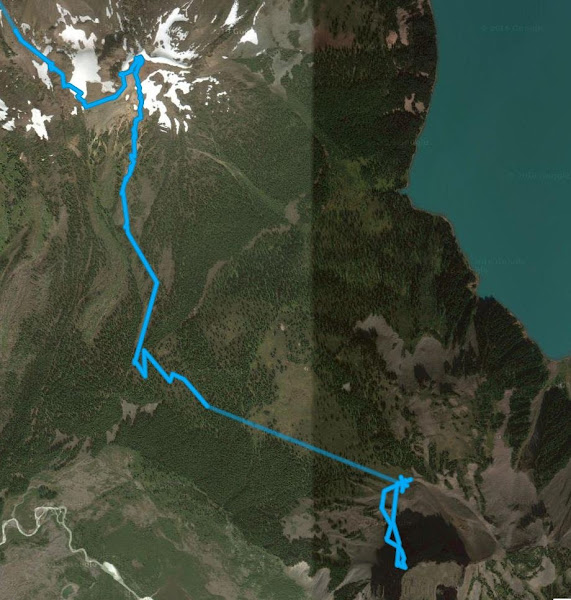 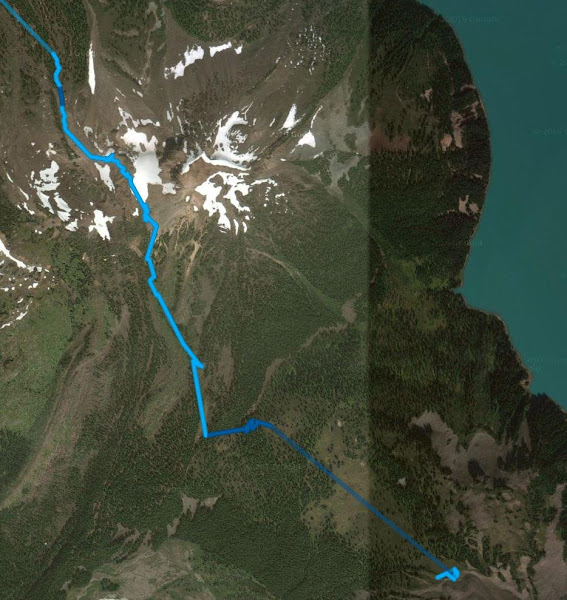 How old are your kids?

See any obvious weeknesses in the table's defense?
My hiking career: a selfish pursuit or a pursuit of self?
thecamel is offline
Quote
post #9 of (permalink) Old 08-04-2016, 01:25 AM Thread Starter
Lenagen
Scaling New Heights

Quote:
Originally Posted by thecamel View Post
How old are your kids?

See any obvious weeknesses in the table's defense?
Kids are 9 and 10 years old. We did not spot any obvious weaknesses in Table wall near the Handle. We had some hopes for the Handle, but were disappointed as it is mostly rotten rock. The front wall is mostly vertical composed of very similar rock to Black Tusk, i.e. solid enough to climb or scramble if you can find a deep enough crack or chimney, but we did not see any. We did not have time to approach the Table from the Table ridge and check the other side for cracks or chimneys. On some of our last summer pictures the other side looks more promising, but pictures may easily be deceptive.
I think that Table may be doable by skillful climbers with climbing gear and belay equipment, but not by scramblers, as the walls are vertical, tall and unforgiving. Rotten rock is a huge hazard. I think that those who successfully climbed the Black Tusk true summit may attempt climbing the Table.
Lenagen is offline
Quote
post #10 of (permalink) Old 08-04-2016, 01:35 AM
alexcanuck
High on the Mountain Top

Well done with the kids! (Well done even without kids, BTW, with kids add a couple of extra adjectives.)

We were camped (via inflatable kayak) at Price Bay then. Almost hiked up to Table Meadows on Sunday, but the truly magnificent bug display this year convinced us to stay out on the lake. Quite a reasonable approach to the meadows from the lake.

Re The Table itself. Nasty, nasty climb is is all I've heard and seen. Well beyond reasonable scrambling, true tough technical on rotten rock. Best appreciated as landscape from another destination.
Lenagen likes this.
alexcanuck is offline
Quote
post #11 of (permalink) Old 08-08-2016, 11:05 PM
KARVITK
Super Moderator

Well done in getting lots of mileage in your hiking with the kids.

Great photo set, and pretty amazing shots of Table Mtn. I once tried Black Tusk, got to the bottom of that scramble part but had to retreat in face of light rain and fierce winds.