Strange coincidence on Douglas and Lychnis
On a lovely september long weekend I decided to go after two rarely ascended peaks in the Skoki area - Lychnis and Douglas.
With very little info So and I started the hike from the Fish Creek parking lot. We set up camp after several hours of hiking and
ate a big supper in order to have the energy for next day`s assault on Mt. Lychnis. I did not expect to see anyone on this
trip, but on the way up Lychnis col I noticed footprints. Could it be that someone else decided to climb Lychnis on the same day as us?
"No, it can`t be. That`s impossible! Who would even consider attempting a remote and obscure peak on the weekend when every single 11,000er was in shape?". We didn`t have any problems reaching the summit of Lychnis despite the lack of beta. The route was obvious and pretty straighforward .
We spent over an hour on the summit, soaking in the
million dollar views, and eating sandwiches. We did not see any signs of human activity for the whole day. I guess, the footprints must have been old.
On the 3rd day we went after our biggest objective - Mt. Douglas. The approach was a lot longer
than we expected involving a massive amount of elevation loss. We knew it was going to be a long and physically exhausting
day. After trying a couple of different lines on Douglas, we eventually found a good route to the summit. The most shocking moment came when I opened the summit register. Mt. Douglas
turned out to be a very popular mountain. It has seen a lot of traffic till 2005 and then it was quiet until... September
1, 2013!!! I couldn`t believe my eyes. Somebody was on the summit of Douglas on the previous day and wrote the following:
"A cloudless, summer day. Watching fellow climbers on Lychnis Mountain... Good eyes dad! Could do with some chicken wings.
Waving at 2 climbers on Mt. Lychnis." Signed by Liam and his dad. (Yes, they saw us from Mt. Douglas!)
I was in shock. Nobody has been on this mountain for over 8 years and on September long weekend 2013, two different parties
stood on top of this giant.
I later found out that Liam climbed Lychnis on September 2nd - the day I was on Douglas. It`s hard to believe that
two different groups of people
decided to climb the same obscure mountains, on the same weekend, using the same approach and did not run into each other! The only difference was, Liam and his dad climbed Mt. Douglas
on the day we were on Lychnis and we climbed Mt. Lychnis
when they were on Douglas. What are the chances of that! I should have bought a lottery ticket after this trip.

Thanks for the TR Raf. These two have been on my list for a while now.
Vern Dewit

Something you don't see very often; thanks for this great report. Views from Lychnis col back to main Skoki area are fantastic!

Out of curiosity: From this angle it looks St. Bride might be feasible, if there is break / chimney in that rock band guarding summit plateau: 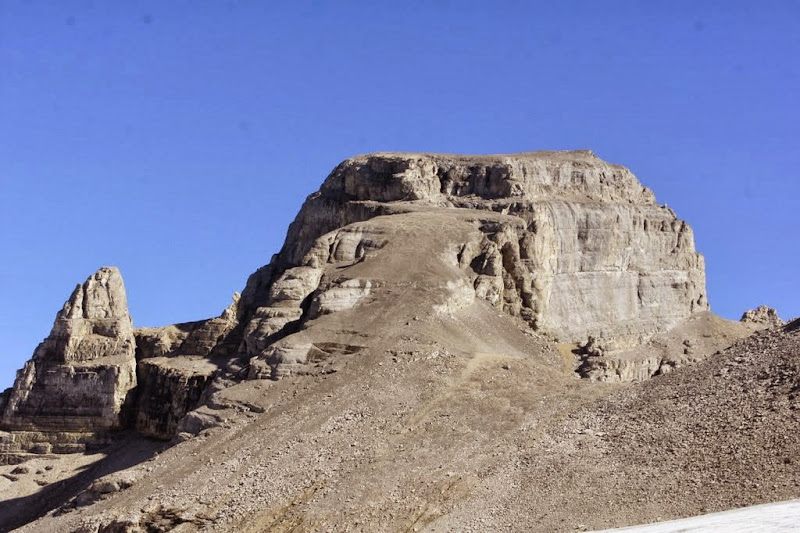 I looked (briefly) on Internet, but could not find anything. Has it been climbed, and is it only climber domain?
Autumn Sky
zeljkok is online now
Quote
post #4 of (permalink) Old 01-22-2015, 02:44 PM
vern.dewit
High on the Mountain Top

Quote:
Originally Posted by zeljkok View Post
Something you don't see very often; thanks for this great report. Views from Lychnis col back to main Skoki area are fantastic!

Out of curiosity: From this angle it looks St. Bride might be feasible, if there is break / chimney in that rock band guarding summit plateau:

I looked (briefly) on Internet, but could not find anything. Has it been climbed, and is it only climber domain?
It has been climbed (twice I think - once by Rick Collier) but it's a tough one. I think 5.8 or so.
Vern Dewit

If you've ever seen Mt. St. Bride from a different angle you'll know why it's so rarely ascended. The deep notch that you cannot see from this picture is probably 10x wider than Cline's and a whole lot more difficult. If I remember correctly Rick's ascent involves climbing up to 5.11.
StevenSong is offline
Quote
post #6 of (permalink) Old 01-24-2015, 12:48 AM Thread Starter
MtnNinja
Headed for the Mountains

The view from Lychnis col is fantastic! I`ve always wanted to see the Drummond Icefield. I have been extremely disappointed with all of the Kane peaks in Skoki, because none of them are high enough to give you a good view of the Drummond. I wish somebody told me, that all I had to do is to hike up to Lychnis col in order to have a great view of the icefield.

Sometimes you don`t even have to climb a mountain in order to have awesome views. Don`t get me wrong, the Kane peaks have fantastic views (Pika Peak is my favourite). I was simply obsessed with the Drummond Icefield and wanted to see it so badly... LOL

Regarding St Bride, the scree slope you see in the picture above takes you to the top of Little St Bride. Highly recommended! It`s easy and will give you even more awesome views. Another option is to hike to the high 3000 m pass between St Bride and Lychnis. You can see both the Bonnet and Drummond Icefields from there. I really like this area. Took me several years until I finally went there, but the wait was well worth it!
Last edited by MtnNinja; 01-24-2015 at 12:54 AM.
MtnNinja is offline
Quote
post #7 of (permalink) Old 02-19-2015, 10:21 PM Thread Starter
MtnNinja
Headed for the Mountains

Zeljkok: You can easily go up Little Bride. It`s an easy hike and offers amazing views of both the Bonnet and Drummond icefields. See the photos below. You`re not gonna get a FA (perhaps you will get first recorded ascent! LOL), but I bet not many people have been up this nice, little, sexy peak with million dollar views!
Last edited by MtnNinja; 02-19-2015 at 10:29 PM.
MtnNinja is offline
Quote